Come On Pops, I Need A Little More Speed 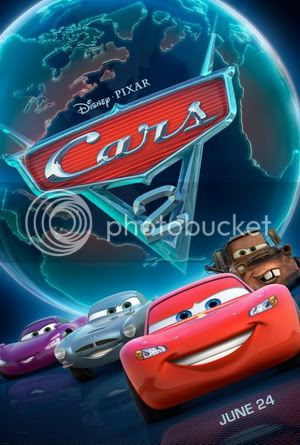 Cars 2 (Lasseter and Lewis, 2011)
When I searched Cars 2 on imdb.com, it was the first result, but right below it was (somewhat inexplicably) Star Wars Episode II: Attack of the Clones, another sequel that was lambasted by critics who apparently felt scorned. Prior to the release of Pixar's latest film Cars 2, there was a brouhaha regarding the movie's existence as nothing more than a mindless cash grab. It seemed like far before the movie was even screened for critics that it was practically destined to be shredded by the critical community. Now in the past I have had my share of problems with Pixar, as it always seems to me that since Wall*E the studio has done its best to artificially manufacture emotion for the sake of seeming profound. This notion was incredibly clear both in Up's sectioned off sections of emotion that were jarringly inserted alongside its broad comedy, and the same could be said of many of the scenes in Toy Story 3. So I entered Cars 2, a sequel to what I consider one of the worst of a catalog of mostly lackluster entries, expecting to come out, as many other critics were, completely furious. But in the end, I was mostly left wondering one thing: why?

In all honesty it seems like quite a bit of vitriol for what is a story with a focus even more simple than main character Mater (Larry the Cable Guy). Basically we have a spy movie, complete with slick car chases and drawn out action sequences. As Lightning McQueen (Owen Wilson) travels the world racing in an alternative fuel endorsed super race, we watch a falling out between friends that helps filter all the hijinks between Mater and whichever other eerie talking vehicle that he is with at the current moment. Of course we have a traditionally shoehorned in Pixar villain that makes sense in the story's context, but never really comes across as menacing either. Really though it's the falling out between McQueen and Mater that serves as the focal point for the obligatory moral lesson that we are expected to take away from the movie. And from the performances - with Larry the Cable Guy somehow coming off as less irritating than Owen Wilson - to the half-baked comedy the entire film is completely, totally serviceable.

Actually, at points it even goes beyond serviceable and reaches levels of almost pure quality. While I didn't laugh much - actually at all - during the movie, it does have some interesting elements that can at least be seen as enjoyable. I honestly do not know much about racing, just that there are a number of different cars and that apparently open wheeled racing is popular overseas. As such, the performance that John Turtorro gives as McQueen's rival, Italian racecar Francesco Bernoulli, stands out amidst the other characters as so completely self assured that it's hard not to be charmed by the character. And visually the film is animated well, even if the there are points where the cars themselves move in ways that seem to clash with what they can do in this world. For the most part though, it's a well animated feature, even if the visual aesthetic is incredibly underwhelming, though that may just be the muted color palette caused by the 3-D glasses, but even considering that the film is not that visually interesting aside from the actual races themselves.

However, the film does enough with the camera to get by, and that's not where my problem with the movie comes in to play. I actually don't even have a problem with not finding the movie funny, as the children in my audience seemed to get a kick out of it and comedy as a whole is incredibly subjective. No, what I was troubled by was the presentation of foreign countries. Yes, Disney is known for taking nations and boiling them down to stand in symbols and signs that represent an entire nation, so seeing these generic cultural markings that are incapable of capturing the intricacies of a culture is not a huge surprise. What did come as a surprise was just how broad the script got with most of the comedy and portrayal of foreigners. Yes, Japan is whacky, I've got it! And Italians are all about eating and drinking. Comedic gold, no doubt. Just as the British are so dedicated to tradition that the figurehead of their country refuses to leave a race even in the face of immediate danger. Well, okay, maybe some markings have a foot set in reality. But for the most part the movie becomes so broad in its portrayals of other countries, and ends on such a decidedly pro-American note, I felt as if there had to be a layer of winking or satire that I was missing.

I doubt it though, because after spending some time with the film (a little under two hours) I am pretty sure that I excised all that I am going able to derive from Pixar's latest offering. Much like the the cultural stand ins, the movie is hollow. Would it be fun for a family? Almost certainly. It gets a little dark, involving torture, guns, and the implication of death, but the movie is just a bit more overt about these elements than the back catalog of Pixar movies that occasionally touch on similar elements. It's mostly just harmless fluff though, not offensively bad, simply dull and forgettable. What I think elevates this movie slightly above the first, and much more than the some of the Pixar films I like a good deal less, is that the heart here is completely genuine. That core relationship between McQueen and Mater is so well fleshed out. It succeeds at what it wants to do, entertain youngsters, teach them a simple lesson, and tells a story that can be entertaining if some of the more inexplicable elements are ignored. However, what it wants to do is not something I care about. Cars 2 is not a good film, but it's far from terrible.

For those reading I'll just write which Pixar films I like and which I don't:

Up, Wall*E, A Bug's Life, Monster's Inc., Cars, Toy Story 3, Toy Story 2, The Incredibles (Though the first half of Wall*E is so fantastic that it almost makes up for the insufferable latter portion)

I think there is a lot of talent buried somewhere in Pixar, I just am usually rubbed the wrong way by the emotions they try to generate. For me they tend to feel so artificial and manufactured, and when they don't they are usually so at odds with the rest of a film's tone that they become secondary.

I would likely rank this one somewhere around Kung Fu Panda 2 in terms of quality. They are both sequels that are probably better than their first entries, but both are also totally forgettable.