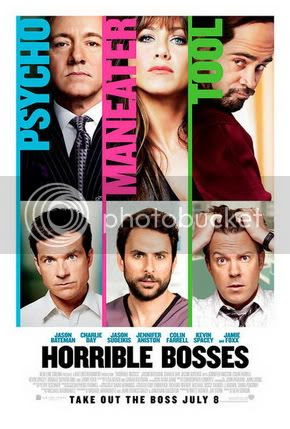 Horrible Bosses (Gordon, 2011)
I still remember the first time that I watched Dr. Strangelove, a magical movie that for many years remained my favorite film of all time. For me it exists, of the ones I have seen, as Kubrick's best film. The way it perfectly blends absurd humor with a much more sinister, and darker, type of comedy is magical both in execution and in thematic resonance. So when I first saw the trailer for the new dark comedy Horrible Bosses I was, despite not expecting Kubrickian levels of greatness, hoping for an understated comedy that went against conventional construction of some of most traditional R-rated affairs like the abysmal The Hangover Part II. The premise here can suit a really dark fantasy, perhaps even a beautiful dark twisted fantasy, so does Horrible Bosses capitalize on all the promise in its execution?

At times the film certainly does live up to its darkness. The premise is fairly simple: each man wants to kill their boss. I considered breaking things down among the main characters, but honestly when discussing hte main cast it is likely more useful to simply call them Jason Bateman, Charlie Day, and Jason Sudeikis because essentially the three comedians are put together and asked to do their schtick. Bateman plays a fantastic straightman, Day flips his shit and has a high pitched voice, and Sudeikis is a blissfully ignorant, oversexed middle man. They attempt to hire an assassin to kill their bosses, an hilarity, theoretically, ensues. What impressed me was just how well the supporting actors were in this movie. In fact, some may say they are the only ones who give performances (not true), and they all do it fantastically. Kevin Spacey is at his most vile in the role of a business president, Jennifer Aniston is arousingly wanton in the role of a sexually charged dentist hussy, and Colin Farrell is brilliantly unhinged as a coked up rich boy. Not to mention a tattooed failure of a man in the form of Jamie Foxx in a role where his character's name is likely more spot on than anyone else.

But a comedy is supposed to be funny, especially these ensemble pieces where the entire cast is essentially just riffing on one another. I've always held that comedy is subjective, perhaps even more so than a drama or action film. As such, I imagine most people will find this about as funny as they find the individual actors in any of their other films. I found the funniest parts of the film to be the throw away lines that Bateman or Sudekis muttered under their breath, while Day's loud and obnoxious mania became just that fairly quickly. Aniston though, somewhat surprisingly, delivered the biggest laughs and actually made Day's character feel justified in the film's narrative. As with any dark comedy though, it's not about the big laughs, it's about the subtlety, and when that hit the movie was at its finest. Sadly, there was such a disconnect between the subtlety and the over the top ineptitude of these men that there were large, unfunny sections. But, once again, your mileage may vary based on how much you like these comedians. At the very least these characters are, at least mostly, easier to relate to than the Wolf Pack of The Hangover series, and I could see myself sitting down and enjoying their company, which always helps foster laughter.

But it cannot be forgotten that Horrible Bosses is a dark comedy, and, just as I predicted in my box office battle post, here is where the movie falls short. Not only is there a hesitancy to fully carry out the premise, by the end of the film it almost feels as if what came before was an entire waste of time. Save one very huge coincidence, nothing else that happened over the course of the film had any bearing on the almost too tidy ending where everyone gets to be happy and we are able to potentially set up for a sequel. There's a car chase without stakes or humor, there's a callback to an earlier gag, and then we get an epilogue. When the credits start to roll it's hard to avoid feeling nihilistic about the lack of agency that any of these men had in the narrative. In a way that undermines any of the stakes of the film, and it really is a conclusion that makes the rest of the movie seem even worse in comparison.

It's actually because of this reluctance to fully commit to the darkness that turned me off of the film in general. If it is basically going to tell me that there was no point to the entire affair, and it basically does just that because the movie is completely devoid of any type of unifying theme, then why would I spend an hour and forty minutes with a bunch of comedians telling jokes that they have already told before? To see all of the men together, perhaps, which works when they are not stepping all over the others's lines, but if the laughs are going to be based on how much I like a given comedian's style of comedy than it almost feels like I would be better off watching an episode of Arrested Development, It's Always Sunny in Philadelphia, or some SNL youtube videos that feature Sudeikis. What should have been a delightfully dark affair, sadly devolves in to an empty compilation of skits that is at best passably funny and at worst a complete waste of time.

The casting here is partially brilliant in the way that it is used to handle the work place power dynamics that it explores. Having A list stars play, for the most part, incredibly against type in supporting roles while actors who are traditionally assigned to supporting roles is conceptually interesting even if it doesn't actually add to any bigger ideas the film could attempt to address.

It's not hard to believe this movie was directed by the same guy who made The King of Kong: A Fistful of Quarters. Now I love that movie, but for the most part this movie is so visually bland that it actually might be less technically impressive than some documentaries I have seen.