It's Awards season, and the time where year end wrap ups begin to hit hard. As a result, I need to begin writing at a much more rapid pace in an attempt to crystalize my thoughts on all the wonderful (I know, but bear with me) film that are sure to be released in this time. So what we have are an upcoming series of shorter reviews that will rarely delve in to the same type of analysis synthesis that I attempt to craft with my writing. Then there will be a huge onslaught of year end lists. I'll try and sprinkle a few editorials in there as well, and there's probably a major site overhaul coming up. So there's the state of Processed Grass, and now on to the review! 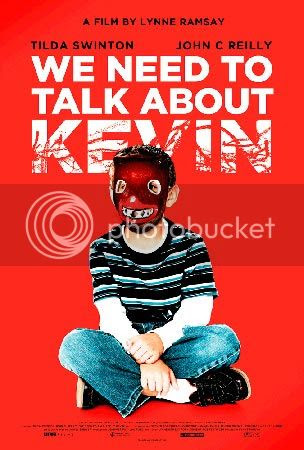 The new film from acclaimed Scottish filmmaker Lynne Ramsay, We Need To Talk About Kevin, recently had a one week limited pre-Oscar qualification run type deal in NYC and I had a chance to see it during that time. Basically what we have is a quasi-horror film that, much like other indie standout Martha Marcy May Marlene, takes many of its cues from psychological horror and Gothic tropes than delving in to new age cinematic scares.

Actually, I'm not sure this film is all that scary. Sure Ramsay has a ton of arresting visual shots (doesn't she always?), especially early on where the color red is used to chilling effect to both underscore and act as the focal point of many scenes, but even considering the subject matter it never becomes a full on horror. More of a surreal drama that inter-cuts the past and present of Eva, played wonderfully by my almost best actress of 2010 Tilda Swinton, as she copes with the fallout and build up to her son Kevin's (great performance here from Ezra Miller of Afterschool fame) murder of his father (John C. Reilly) and sister along with the shooting of his school. Tangential facts, mostly revealed in the beginning of the film, but the way it's presented is astounding.

What is most striking about the film is how it doesn't really vindicate Eva much at all, nor does it definitively portray her as the 'bad' character. It's established early on that we are seeing the world filtered through her judgmental eyes, and we are constantly reminded throughout the movie that she is not a great person. She literally tells her baby son that he is the reason she is miserable and has had to give up all of her passions. But Kevin, as we see him grow up, also constantly torments his mother for seemingly no reason.

Reasons, in fact, do not seem to be the film's primary concern. Rather than concerning itself with the why regarding Kevin's actions, it forces the viewer to sit with the consequences. As such, it becomes much more haunting. This film is not Elephant, nor does it ever pretend to be. In fact, the way it mostly erases the shooting itself from the film works to establish a chilling tone that has the flashbacks brimming with sinister undertones and the post-shooting portions colored with a melancholy.

It's easy, when tragedy strikes and is made in to a fictitious film, to focus on the act itself as a way to shock the audience. As a result the action itself which we find so horrid and shocking becomes perversely glorified, an anticipatory scene that is meant to be a pay off more than an avoidance. It's easy to forget that life still goes on, and We Need To Talk About Kevin explores the after with an assured hand. Though the pacing is a bit methodical, slowing down to make the more strenuous scenes more pronounced, the end product is an examination of what tends to be overlooked. As that, it's an unbridled success, and a film well worth the time of anyone interested in meditating on the lost, the forgotten, and the overlooked. Not heartbreaking, but certainly harrowing.


And if you want to know what I'm watching, listening to, playing , and reading you can follow my tumblr account!
© 2011 Richard James Thorne
Posted by Rich Thorne at 9:28 PM