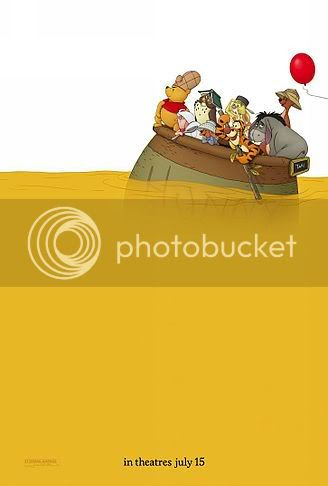 Growing up I watched, as I am sure many people did, a ton of Disney movies. Personal favorites include Hercules, The Lion King, and Bambi. I never really had too soft of a spot for The Many Adventures of Winnie the Pooh, despite enjoying a lot of the stories that were told. However, when the reboot, or continuation as the case may be, was announced I found myself excited to get back to the 100 Acre Wood and rediscover all of these characters again.

A surprisingly beautiful rediscovery as well. Winnie the Pooh does an excellent job of giving the viewer a tour through these childhood escapes by compiling three shorter stories from original author A.A. Milne and stringing them together in to one cohesive narrative. For the most part this film has exactly what you would look for in a Disney movie and a Winnie the Pooh joint. Pooh (Jim Cummings) is hungry, Piglet (Travis Oates) is endearingly cowardly, Tigger (Cummings) bounces, Eeyore (Bud Luckey) is depressed, and Owl (Craig Ferguson) spouts off pseudo-intellectualism in a British accent that barely masks the reality that he is just a silly blowhard. Even Kanga (Kristen Anderson-Lopez), a character I always found slighted in the original, becomes a more fully realized figure than she has ever been (despite still mostly just being  identified by her existence as mother, which I suppose is problematic). It's all packaged in an aesthetic that recalls the original films, so despite the advances in animation technology it always feels as if you are truly returning to childhood.

The successes of the film are twofold. It's funny. I have been harsh on many of the recent Disney and Pixar films for failing to create any sense of sustained humor, mostly relegated to a few gags that hit and fade away quickly. When this film isn't charming, it's telling a joke. Smart jokes even that have the narrator (John Cleese) guiding Pooh throughout the world, or brilliant acts of confusion where every character attempts to have a conversation about not knotting knots that, as Eeyore says, is all for naught. The levels of charm are simply irresistible. 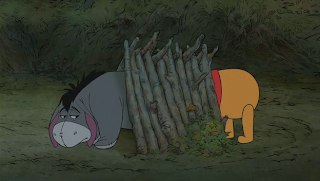 And what makes this even more infectious in its cheer is the music. All of the cast songs here, while hard to say how they stand up to Disney classics without the benefit of time, are magical. Standouts are Tigger's song and the Backson tune, but for the most part each time the cast performs I found myself swept away with joy. That was occasionally undercut when Zooey Deschanel's voice cut in with the movie's lesser songs (aside from a pretty good rendition of the opening theme), but these portions are so minor that the complaints become almost insignificant in the larger tone that is created.

Though the film doesn't have the emotional heft that I was hoping for, I really would have liked them to do a goodbye sequence that matches what is found in the books, this also leaves the series open for potential future entries. Certainly there are more stories to be told, as this movie only clocks in around sixty minutes and really left me wanting more. If they are as lovingly created and fully realized as this one, I hope we get many sequels. This movie sets itself up as a way to introduce a brand new generation of children to a wonderful cast of characters and top notch animated filmmaking. While I cannot call Winnie the Pooh a perfect film, I do like this new tale.

I do have experience with the older characters to an extent, and a more limited exposure to the books, so I feared that it would take a while to adjust to new voice actors. They do sound different, but the way that these voice actors make the characters their own and give them new, unique identities while still staying true and being just close enough to the originals means the film is packed full of excellent performances. Though I doubt any of them win awards, I hope this gets nominated for an Oscar.

I did not include a review of The Ballad of Nessie, a short film attached to this in theaters, because I have not watched it yet. I also hear that in some theaters there was a Regular Show short attached to the film. Now Regular Show is probably the best cartoon 'for kids' on TV right now, but if the short was anything like the show I can't think of a more jarring contrast in style and purpose than that show and this movie.