In The Courtroom Of Honor, The Judge Pounded His Gavel 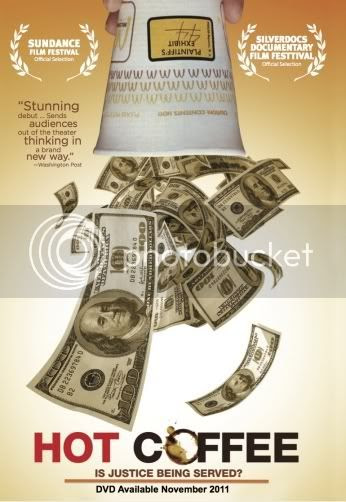 I was going to give Hot Coffee a full write up, but decided against it because I'm really not sure what I have to say analytically. It's hard to even call this post a review. There's a lot going on in this film, and as such it feels a bit unfocused throughout. The title itself is misleading, which I'm mostly glad about because it meant I didn't need too see a bunch of pictures of an old lady's burnt loins. That was traumatizing, which was the point. So that worked. But the larger point, so it seems, is that the legal system is quickly being framed in a way that ignores the common man in favor of big businesses. This is probably true.

It's a standard message, but the film also makes a point of presenting the American people as misinformed about a lot of the workings of the legal system. This is probably also true. I really liked The Cove because, despite being 'about' dolphins, I thought the greater tragedy was the way the people interviewed were constantly and effectively deceived by their own government. That kind of happens here, but there's less distance. So it's not really tragic, it's kind of masochistic. I'm aware that I'm not the most politically informed person, I don't need a film to remind me of that, but I know what I can and read when I get interested. So the bad guy in the film is big business, except when the bad guy is the lazy American people, so I'm the bad guy because, like the man who voted to pass some Prop that ultimately screwed him over, I always vote but I don't always research.

But the American people are also the victim, because it's the way the media has covered these cases that has left us misinformed. This, I know, is also true. So there are a ton of bad guys. Which is sort of where the film falls apart. It wants us to take action, I suppose through some grassroots movement since the call to action coda isn't all that specific. But it ignores the larger concept that can't be changed: the government is in a position where it will not be shaken up. These big businessmen are in government (like Rove, they talk about this) and legislation will constantly be pushed through slowly but surely that sneaks in a few lines here and there that add up to bigger changes to better protect these businesses.

The other branches of government are so tied to these business interests and the need to maintain their position of power, hence the two party system, that it's going to inevitably stay the same. The system itself is too protected, and the stakes for the other branches are too high. Ultimately this film just reinforces the notion that the common man is screwed, and maybe it hasn't always been this way, but I think it probably has been as far back as history allows us to look. Our system gives individuals some ability to move up to a position where they fight to maintain a position of power, which is good. The media is not going to change because they have a hand in everything, the businesses won't change because they are businesses, and the government won't change because they are run by business men and lawyers who don't want to give up their financial security.

So ultimately this film left me feeling desperate, angry, and depressed. I don't think that's what it set out to do, but maybe it did because that effects change. If change could happen, which it can't. The technology could let it happen, but the government is doing all it can to keep that from happening as well.

But it's cool that this film was directed by a woman. The world needs more female filmmakers.

If I were to give this film a rating, I would give it a 3/5 stars or whatever, because I was informed but not entertained. It's competently made and presented, but it doesn't do all that much special as a film.