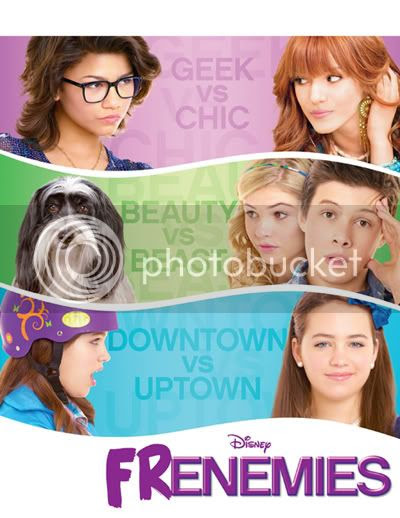 The latest Disney Channel Original Movie, Frenemies, starring Shake It Up starlets Bella Thorne and Zendaya Coleman was marketed as the second coming of Princess Protection Program, but in actuality is a much more disparate affair. While watching the opening credits I was surprised to see that multiple screenwriters were credited, in fact this sequence identified that the film was three acts (no shocker there) and each act was penned by different writers. Coleman and Thorne play two girls who start a fashion website, a plot line that is used as a framing device to explore three narratives that each involve friends turned enemies turned friends. In a way this takes a cue from the pages of Valentine's Day, but because the three stories all involve kids from the same town the characters occasionally intersect, basically providing new spins on traditional movie plot lines.

Kicking off the film is a plot focusing on super smart science mastermind Jake (Nick Robinson) who is taken advantage of by resident popular girl Julianne (ANT Farm's Stefanie Scott) in an attempt to score her a better grade. She hates Jake's dog, who also happens to be his best friend. At some point an unpopular skater girl, Savannah (Mary Mouser), with a crush on Jake interferes to wrap everything up. The next act follows Avalon and Halle (Thorne and Coleman) as they start their GeeklyChic blog, get recognized by some huge fashion publisher mogul, and must compete for the editor in chief job at a magazine by submitting the best article. Friendly rivalry turns bitter, fights are fought, and eventually all ideas of friendship are reaffirmed.

Finally a Prince and the Pauper story line is explored when Savannah meets rich socialite Emma Reynolds, who happens to look exactly like her (and is also played by Mouser). They switch lives for a week, swap kind of boyfriends when Jake is asked out by Emma pretending to be Savannah (and if there's a great performance in here it's definitely in the form of Dylan Everett as self absorbed rich boy Lance), and fight over each other's man. Then there's a musical number where Avalon and Halle show up for some reason. Because why not, right?

Though these plots are all fairly pedestrian, most of them are told incredibly well, with the actors all bringing a specific type of charm to their characters. What I found most interesting about the film though is the way sexual codes are overtly presented. It's expected in a Disney Channel movie that the most conventional markings of sexuality and relationships would be reinforced, but they are presented in such a direct manner they sort of become the focal point of the film. Considering that these shows draw in so many young viewers, these ideas are what the nation's youth recognize in real life as acceptable behaviors and codes, and as such I think inspecting how relationships, gender codes, and coping mechanisms for developing sexual awareness is crucial in understanding how they function both in media and for the nation at large. In the first story we see Julianne as manipulative, framed as a seductress and the evil character. She controls her sexuality and is very cognizant of it, but her position as villain frames the woman's sexual side as evil, ultimately punishing her for her manipulation.

So yeah, I understand Disney reinforcing traditional monogamous codes, but what unnerved me was in the second story when the school's newpaper reporter (I am blanking on his name and imdb is currently not helping) uses his connections, status and power as leverage over Avalon seemingly in an innocent attempt to win her heart. But not really, I mean she basically pays him back with a hug. Maybe that's innocent, it's not like the two had sex or even kissed, but it's definitely presented as a form of sexual coercion that, when employed by a male, is rewarded. Certainly I wasn't the only one unsettled by this plot point. Luckily Savannah acts as a saving grace, openly resisting boys holding doors open for her as her own way to assert independence, and even getting Emma out of a clearly unhealthy relationship. In a film cluttered with troubling gender politics, it was great seeing the care taken with her character. She's not flawless (is any teenager capable of perfectly advocating for gender role re-evaluations?), but any progress is still progress.

I wish that this film was a bit more cohesive, despite stories having overlapping characters all three parts never feel completely connected, but as a collection of stories with enough of a thread uniting them the film works. I have expressed worry that Disney's original programming was potentially running dry, but between this, Lemonade Mouth, and Sixteen Wishes, at least the movie front is picking up the slack.