Knowing Nostalgia: Ruminations On HUGO And THE MUPPETS

Nostalgia is a funny concept. It clouds our judgment, making us elevate astoundingly mediocre art to positions of transcendence. As an avid video game player I find that I am at my most nostalgic when going back to staples of my childhood (the Metal Gears, Marios, Sonics, and Final Fantasies of the world), but even with my most beloved titles I can still recognize fundamental flaws in game design. But you know what? I'll still gladly play Princess Tomato: Adventures in Salad Kingdom, or watch Hercules for the umpteenth time, or maybe even give that old Marshall Mathers LP CD a spin in the car stereo. And I can be, at least momentarily, happy. Sure it's a hollow kind of happiness, but it's there and it's real. Sometimes I just like to get nostalgic. 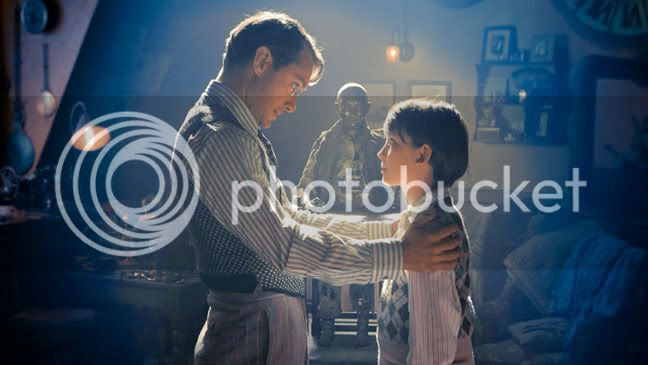 And over the Thanksgiving holiday I found myself at the movie theater watching two particular films that approach the idea of nostalgia in vastly different ways.

The Wednesday before Thanksgiving the new film from famed director Martin Scorsese, Hugo, was released. Now despite not being too hot on the older Scorsese films I have seen - most notably Taxi Driver - I do consider The Departed one of my favorite movies and have a high respect for other recent outputs.

Combined with this prolific filmmaker's first foray in to the world of 3-D cinema, I had reason to be excited.

For the most part I was not disappointed. Scorsese crafts a beautifully realized early France that is actually enhanced by the new technology. In fact, if we take concert films as the big event movies to popularize 3-D, and the generic storytelling technology vehicle Avatar as basically perfecting the technology, Hugo is likely the first film to validate the use of 3-D as a film-making tool. I don't often get lost in a world, but this movie had me completely engrossed; however, it's not until the latter half of the film that the plays to nostalgia really start showing up in full force. 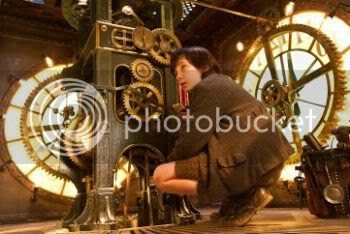 Eventually titular character Hugo finds out that an older man who he has been working for is actually famed silent film director Georges Méliès. Cue flashback to this man's films as Scorsese gives the audience a crash course in film history through a combination of actual archival footage and stunning set recreations that are more wonderful than watching bigfoot's pet unicorn poop rainbows. But it's not exactly silent films or Méliès that I became nostalgic for; instead, it was the artistic medium. I was taken back to my childhood, sitting in the theater watching The Pagemaster for the first time. There's a loving reverence for film that, interspersed with Hugo's quasi-hero's journey through childhood that hooked me. I left the theater in awe, invigorated and ready to take on all of the world's challenges (namely these silly final papers).

Then the next day, as is customary for my family on Thanksgiving, we all took a trip to the theater together to see Jason Segel and James Bobin's reintroduction to The Muppets. I'm not a huge Muppets fan. I have not seen all of their films, but to this day I am still able to sing along to most of the songs in A Muppets Christmas Carol. Plus it was the holidays, engaging in a family tradition. I was ready for the nostalgia to kick in full force.

But it never happened. I casually watched what was a mostly serviceable resurrection of these long dormant characters of my youth. Yet aside from a few laughs here and there it never clicked, and I left feeling a little depressed. Surely there was something wrong with me, as it seemed like everyone I knew was overtaken with joy after seeing The Muppets. Now I realize I am a heartless monster with a robotic heart of metal and stone who detests the idea of fun, but even that has been penetrated in the past. Just a day before, in fact. What was I missing?

In retrospect, I don't think I was missing much. The most effective moments of Bobin's film are, undoubtedly, the ones that set the cross hairs directly on the nostalgic bone. Even without watching much of The Muppet Show, the recreation of the theme song late in the film was concentrated joy, as were most of the bits of the Muppet fundraiser. And it all led up to a beautiful rendition of "Rainbow Connection" that even had me tearing up a bit at the sheer magnificence of the scene. So if it's not these Muppets Greatest Hits moments that aren't working, something else has to be breaking that nostalgic pull.

It seems to me to be the way the nostalgia mingles with what is new. Gary and Mary, the human component to this film, along with Muppet newcomer Walter completely feel flat. They all adored the Muppets, made their love for them apparent, and this should have let me fall right in line with the film. Though having them mix with the Muppets seemed to fight against evoking this nostalgia. I know in older Muppets movies celebrities make a number of cameo appearances, and the ones used in this film are mostly brilliant, but those movies are also always about the actual Muppets themselves. I don't need to main characters to tell me how i should fear, or help me share in a sense of wonder, that's what the movies themselves are for, that's why I go with other people. When the movie tries to mix the new with the old, it all becomes a bit of a mediocre mess.

Even without any affinity for or knowledge of Méliès and his films, I was still brought back to my own childhood. And having the movie be so much about childhood, even one so far removed from my own, appealing more to a universal love through a specific occurrence makes a good deal of sense. Here's where the 3-D also plays a huge part in the film. Aside from being about childhood, it is very much about movies. With the 3-D, we are able to look back on the old through a completely new lens, both literally and figuratively. There's an intermingling of childlike wonder with critical thought, and once Scorsese and the film establish that connection I found myself completely vulnerable to a flood of emotions.

Rarely am I able to revel in the joys of nostalgia without hesitation, so when it happens it becomes just a bit more magical. It really is an odd phenomenon, and as I continue to grow I'm sure I'll develop even more types of nostalgia. For now though, I'm happy that films can still make me feel this way sometimes. Even with some faults, Hugo was joyous. Maybe in the future I'll even find myself with a bit of nostalgia for that first trip to the theater to see Martin Scorsese's stunning attempt at a family film.

That would be just fine by me.


And if you want to know what I'm watching, listening to, playing , and reading you can follow my tumblr account!