There's A Cold Wind Coming Off The Ocean 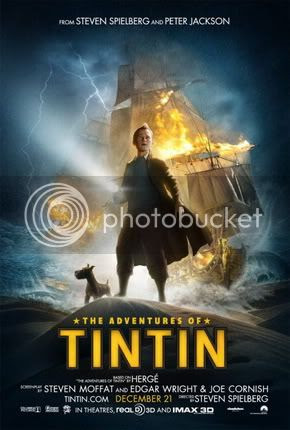 The Adventures of Tintin (Spielberg, 2011)

Earlier this month I wrote a post about nostalgia in film, with The Muppets and Hugo being the focus of that piece. After stepping out of the theater I could not help but think of the term nostalgia when considering The Adventures of Tintin. Though Spielberg may be appealing to a certain nostalgia by adapting the reporter-detective Tintin (Jamie Bell) for the big screen, it seems odd because I am sure the vast majority of the US audience (myself included) has little familiarity with the character or the comic series. What this leaves then is Spielberg working in a realm where he is evoking nostalgia for his past adventure movies. The Indiana Jones, Jaws and Jurassic Parks of the world. Now aside from those dinosaurs I have a great displeasure for the majority of 'classic' Spielbergian movies, yet seeing Tintin I think I finally realized why many of his movies are so beloved.


From the opening credit sequence, Spielberg establishes an aesthetic. Now it may be an outdated aesthetic from a land where all the adventures were plentiful, everyone seems strangely upbeat, and all music was written by John Williams, but the point is he establishes it and begins setting expectations for the movie immediately. This movie oozes a style akin to the Indiana Jones films and the Jonny Quests of our world, an unabashed earnestness for a type of movie that simply does not exist in a time where most people are familiar with these things because of Uncharted and The Venture Brothers. There's a sense of globetrotting and discovery, the old meeting the new. All of this is underscored by the performance capture used to bring these characters to life, creating a visual space that exists between reality and cartoon.

All of this is great for establishing a world where Tintin's quest to find the sunken treasure of the Haddock family is bombastic, exciting, and believable. And the mystery is compelling enough to sustain the time between the action set pieces. These are the film's greatest strength, creating a true sense of wonder both through the 3-D and the engrossing action.

Actually, let me put this in to perspective for you. At one point a ship comes crashing through the desert as the scene transitions to a flashback, so we see the water basically wash away the entire sky and sand! And it's wonderful and crazy and beautiful. Spielberg's use of visual trickery throughout the film with something akin to matchcuts is brilliant, and even slightly echoes the comic aesthetic that permeates through the film.

Sure a lot of the big scenes are mirrors of what some people have seen in the two latest Uncharted games, but what Spielberg smartly does is establish early on the severity of these situations. For a film that is rated PG, the number of guns fired is truly impressive. Admirably deployed, there's a tangibility to the situations that Tintin finds himself in. Sure, we all know he's not going to be killed, but the ruthless nature of these bad guys is established early on and carries throughout the film.

However, despite some great action there is a hollow center that I could never get past. This movie is fun, but I feel like if you remove the spectacle of the theater there's not much else going on beneath the surface. Part of this does have to do with the motion capture used to bring the world to life. Though it goes a long way to establishing a tangible world and creating tension, there's a strange disconnect between characters.

Tintin and Haddock, the latter of which is brought to life by the mo-cap master Andy Serkis, look almost completely real except for a few facial features that constantly reminded me of cartoons. On its own that's not a huge deal, but the bad guy Sakharine (Daniel Craig) looks so much like a real person that these characters seem to exist in completely different worlds. Then there are the two Thompsons (Simon Pegg and Nick Frost) who look just like cartoon characters without any of the realistic traces found in the other main characters. 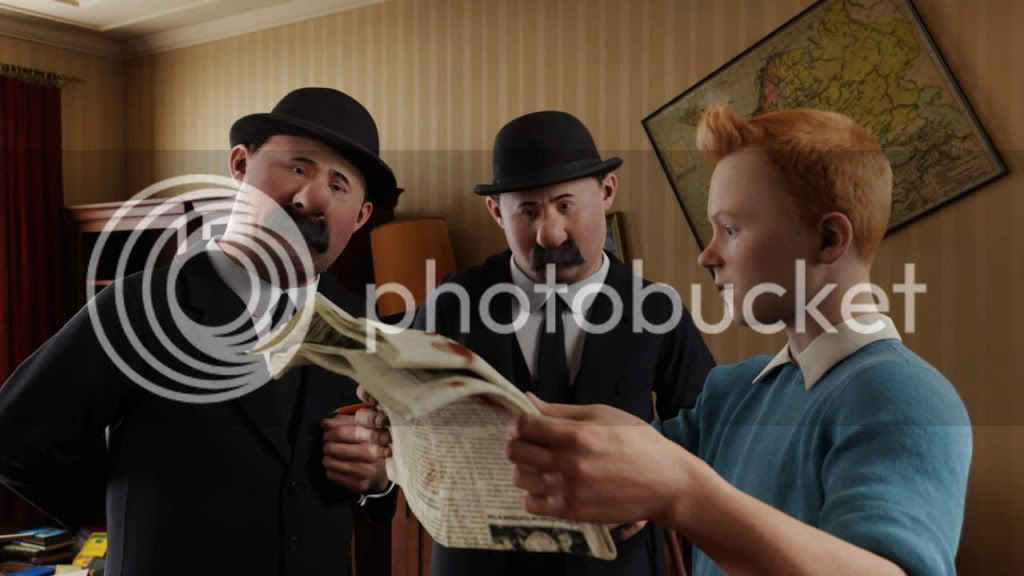 I was also troubled, at least in the early portions of the film, with the way Tintin's character was created. In a way he's basically there to be an observer of the mystery and is a pretty flat character. I actually found that to be effective, because in many similar shows and films the main characters tend to put me off. But before he actually gets kidnapped, Tintin is presented in such a way that made him seem inept. Spielberg presents all these newspaper clippings of his past successes, but it's not until the halfway point of the film that he beings to have any sort of agency.

Actually, for the most part his dog Snowy, another great animal in what is slowly becoming the year of the dog in cinema, does most of the early work. Of course Tintin's ineptitude is minimal when compared to the bumbling, and mostly annoying, Thompsons, but that's not really an excuse for having this charismatic sinkhole at the core of an otherwise riveting adventure movie.

The Adventures of Tintin is fun. For me, even surprisingly fun. Yeah, for a script that was written by Edgar Wright (Hot Fuzz, Scott Pilgrim), Joe Cornish (Attack the Block), and Steven Moffat (Dr. Who), it's steeped in Britishisms, but isn't uproariously funny. But when you are constantly snapping from one sweeping action sequence to another the filler in between seems marginally important. Actually, marginally important is the best way to describe this film. It may not have lasting power, but it's enjoyable for a wintertime popcorn adventure movie, a look back to a type of film that has all but disappeared in our modern world of irony and hyper-awareness. I almost can't believe I'm writing this about the director, but Spielberg proves that magic only gets better with age.

If I used half stars in my rating system, this film would have scored a 3.5/5. Though, again, numbers are mostly meaningless.

It's really strange to see a film released today where there's absolutely no romantic interest. For a movie, and a director, so closely linked to playing up the traditions of standard Hollywood blockbusters the lack of this component was particularly refreshing and allowed the film to keep clipping along and make the breaks between action a bit more focused and palatable.

There also appear to be a ton of references to older Spielberg movies littered throughout the film. I think I noticed Indy, Jaws, Jurassic Park, and either Close Encounters or E.T.


And if you want to know what I'm watching, listening to, playing , and reading you can follow my tumblr account!
© 2011 Richard James Thorne
Posted by Rich Thorne at 3:17 PM