Okay, so I might be about a month late, but for the most part not too much comes out in January anyhow (though one should note that The Grey released in January last year and already we have seen Kim Jee-Woon's first English language film, the surprisingly enjoyable The Last Stand hit theaters along with the Chastain vehicle MaMa), which means that it's still perfectly acceptable to do a 2013 film preview still. Right?

In the past I have gone month by month, mostly in an attempt to not back load everything with what is sure to be a slew of high profile releases slatted for November and December, but including thirteen titles (and fourteen next year and so on) that has become less of a concern. Also a lot of these don't have release dates, so I'm kind of left just hoping they manage to get a distribution deal at some point. But others have dates. There's no particular order for these, just a collection of things I hope will be great. I've attached trailers in the write ups where trailers were available. Get excited! 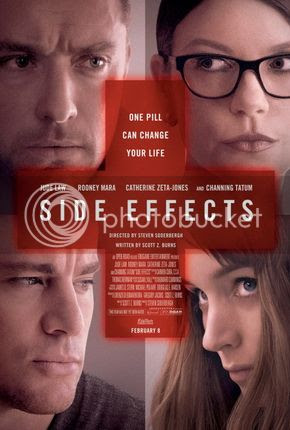 Behind The Candelabra and Side Effects are Soderbergh's two new films (though I'll cheat and count them as a single entry), something that seems to becoming an inviting trend after releasing both Haywire and Magic Mike last year. Much like those two, both of these confront completely different topics and, I'm sure, will allow Soderbergh to continue to demonstrate why he is one of the most intriguing filmmakers working. 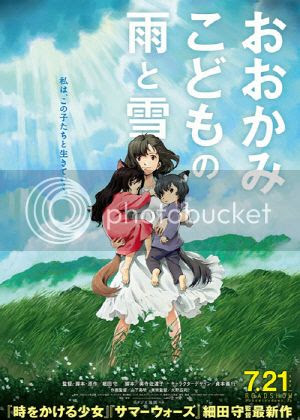 While there will be another (probably mediocre, since just about all of them are) Pixar film this year, and plenty of other animated features from Dreamworks or whatever, it is Mamoru Hosoda's The Wolf Children Ame And Yuki that I most anticipate. I fell completely in love with Summer Wars and have a soft spot for The Girl Who Leapt Through Time as well. This film, judging by the trailer, seems to channel a bit of Miyazaki's My Neighbor Totoro aesthetic for a more family friendly film, but given the pedigree there's little reason to believe this won't be the year's best animated film if it makes its way over to the US in 2013. 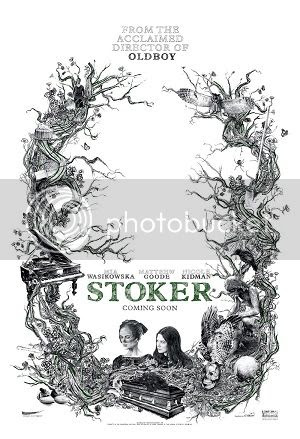 Seems like a theme for 2013 will be notable Korean directors tackling English language films for the first time. Well, include Oldboy director Park Chan-wook's Stoker to the list. Early word is that Nicole Kidman, despite apparently NOT pissing on Zac Efron in this movie (he's not even in it!), gives a powerhouse performance. No word on whether or not she pees on Mia Wasikowska. Grab a towel, watch the trailer, and get ready for March 1st.

Might as well keep this K-train rolling with my personal favorite South Korean director, Bong Joon-ho, also crossing language barriers with his sci-fi Snowpiercer. Actually, with screenwriter Kelly Masterson (Before The Devil Knows You're Dead and fellow New Jersey resident) at the helm this one might have the most complete pedigree. Oh yeah, and Tilda Swinton is in the movie in some capacity. No date yet, but since Mother, The Host, Barking Dogs Never Bite, and (theoretically) Memories Of A Murder are all fantastic there's little reason to think this won't be one of the year's best come December.

Also in kind of crazy almost Korean news there's the English language adaptation of Park Chan-wook's Oldboy in the form of Spike Lee's Oldboy. I honestly have no idea how this thing will turn out, but you attach Elizabeth Olsen to a movie and I'll be interested. You put Josh Brolin in the lead role and I remain excited. You give it an October 11th release date and I get bummed out. If even half of the graphic, bloody bits from the original cross the border in translation, this will be one of the year's most controversial movies, if nothing else.

Could 2013 also be the return of high concept, high profile science fiction? I'm not sure, but the magnificent trailer for Shane Carruth's Upstream Color makes his return to filmmaking following Primer many moons ago perhaps the poster boy for the genre. After failed attempts to rekindle the sci-fi flame last year in Looper and Prometheus, Carruth looks primed to set things right again on April 5th. 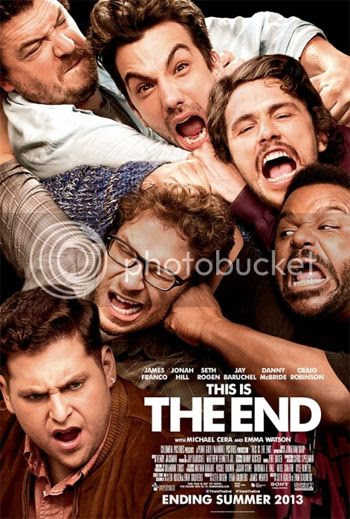 You know what largely wasn't great last year? Comedies. Hopefully when the latest film from writer/directors Evan Goldberg and Seth Rogen, This Is The End, hits theaters this summer we can all rejoice. Or, theoretically, we can all undeservedly hate on Michael Cera for not playing a different character even though the 'thing' with this film, much like Cera's work in Paper Heart, is that all the actors (including leads James Franco, Seth Rogen, Jonah Hill, Craig Robinson, Danny McBride, and Jay Baruchel) are meant to be playing fictional versions of themselves. Emma Watson and Martin Starr will also be in this, so that should be awesome. Not expecting Superbad again, but hoping for something that rivals the quality of Superbad even if the trailer seems a bit hit and miss. 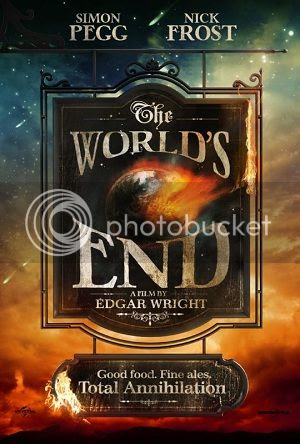 Perhaps it really will be a great year for comedies, because once October rolls around we also get Edgar Wright's followup to Scott Pilgrim vs. The World in the form of The World's End. This pub crawl comedy brings Simon Pegg and Nick Frost back with the Hot Fuzz director (and, unfortunately, the Shaun of the Dead director, but there's been enough time since that one that I'll just count it as an ill-advised misfire) in this science fiction genre send up.

There are also a bunch of high profile releases like Terrence Malick's To The Wonder that probably stars Ben Affleck looking at a bunch of trees. Or some sort of plants, and maybe even some dinosaurs, but maybe not since there are none in the trailer. Presumably there will also be a voiceover portion where a character whispers and meditates on the plight of humanity. It will also be beautiful to watch, like a painting come to life. Oh yeah, also, Malick. 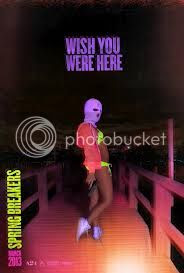 But we are getting ahead of ourselves, because I have completely skipped over writer/director Harmony Korine's latest film Spring Breakers. Somehow Trash Humpers completely passed me over (I promise to catch up with at least another Korine film before seeing this), but after loving what Korine did with Mister Lonely and enjoying "Umshini Wam," paired with one Hell of a trailer (and James Franco being awesome) there's a promise that this provocative action film will be one of the most unique films released early this year.

Now we're getting in to releases that don't have dates but are basically finished and will presumably release at least in a limited capacity. A film that will definitely get a release of some kind is Noah Baumbach's Frances Ha that also stars Greta Gerwig. Though I wasn't as high on Greenberg as I had hoped, my goodwill with Gerwig and love of other Baumbach films has me excited for whatever the end result is here. 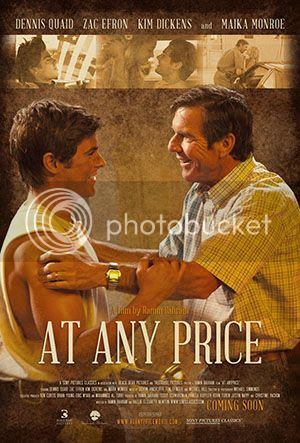 At Any Price, the first traditional studio film from neo-neo-realist master-craftsman Rahmin Bahrani, doesn't have the most inspiring trailer, but the hope I hold out is in the form of both Zac Efron and the fact that Bahrani is also the writer of this film. Yeah Bahrani has a way with the camera, but what made Chop Shop, Goodbye Solo, Man Push Cart, and even his short films "Dogs" and "Plastic Bag" such memorable affairs are a result of excellent writing that interacts with what Bahrani does with the camera. I'm not entirely sure what to make of the trailer, but again I have faith in Bahrani. It's been a while since 2008, and I've been waiting for this film ever since.

But here we are, no tangible release date, but pedigree and the promise of conclusion, yet heaps upon heaps of anticipation and one trailer that came out of nowhere. Inside Llewyn Davis, despite fictitiously chronicling the life of Dave Van Ronk, seems to look and feel a good deal like I'm Not There (not super surprising though given connection to Dylan and the use of a Dylan song in the trailer). There have been a number of years in between True Grit, the last film from the Coen Brothers, and this one, but it seems they haven't missed a step. Hopefully it's time to start getting prolific again, and this film will kick it all off.

There are plenty of other films I'm looking forward to, new entries from Del Toro, Nicholas Winding Refn, two Michael Cera vehicles from Sebastian Silva where he plays dramatic and against type further proving his talent I'm sure, a new Spike Jonze film, a new Kaufman film, Ari Folman's follow up to Waltz With Bashir, and a ton of other things as well.

What are you looking forward to in 2013? Let me know in comments!

And if you want to know what I'm watching, listening to, playing , and reading you can follow my tumblr account!
© 2013 Richard James Thorne
Posted by Rich Thorne at 2:13 PM

Email ThisBlogThis!Share to TwitterShare to FacebookShare to Pinterest
Labels: behind the candelabra, bong joon-ho, frances ha, inside llewyn davis, list, movies, side effects, spring breakers, stoker, the wolf children, the world's end, this is the end, to the wonder, upstream color