Another Morning, Another Opportunity To Do Something Progressive, To Prove That He's Worthy 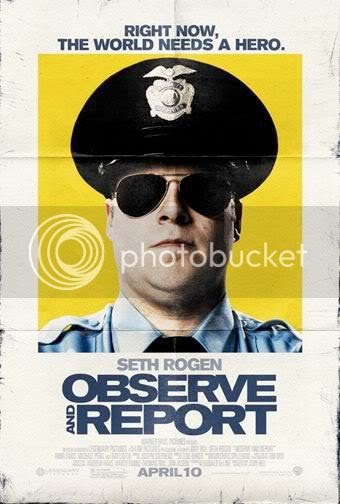 Observe and Report (Hill, 2009)
I recall when this film was first released, I was interested in checking it out but never had the chance to getting around to the theatre because school was pretty hectic at the time. Upon finally getting around to the film I find myself pretty disappointed that I did not get out earlier and actually support it during the theatrical run. In many ways Observe and Report is far from a perfect film. Hell, it's far from a great comedy. Still, I could not help but being fascinated by the entire implications of releasing this major Hollywood film on unsuspecting audiences. Obviously following the release of Paul Blart: Mall Cop a few months earlier the initial comparison is to think this film will be a slightly more mature, in terms of humor, film that operates on a similar premise. Now while I have not seen Paul Blart, I feel mostly confident in saying that the similarities between these two films are likely very minimal. Observe and Report is a black comedy that breaks so many conventional rules of standard Hollywood comedies that I am practically obligated to at least respect the film, but thankfully it also works as a film incredibly well. Also, I should state before getting into my review, that the film has drawn criticism for a 'sort of date rape' scene. I'm not going to talk about that because the scene is used very nicely in the film's context and the real problem people should be having with the depiction is not the sex, but rather the fact that Seth Rogen had a huge glass of beer during the date, yet he still drove Brandi home. Buzzed driving is drunk driving! 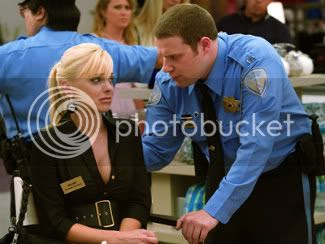 By this point in his career Seth Rogen has started establishing himself as a talented actor. While many would likely point to the recently released Funny People as his coming out party, those who watched Kevin Smith's Zack and Miri Make a Porno from last year should already know of his acting abilities. That being said, Observe and Report is likely Rogen's best performance to date. Ronnie gives Rogen a character that experiences and expresses a range of emotion while remaining distinctive enough that Rogen must make the character his own. Not surprisingly, Rogen approaches the role with a certain amount of respect and hits all the major aspects of the Ronnie characters perfectly. As for the supporting cast, Anna stands out because she is pretty funny and mighty pretty, while Michael Pena and Ray Liotta turn in two really great performances as well. Actually, next to Rogen I would have to say that Liotta provides the second best performance, both dramatically and comedic. Of course the film's strength is not really in the actors themselves but really in the writing and the different characters on screen. Faris, for most of the film, plays the perceived 'love interest,' but Hill makes it clear from the very beginning that she is, despite being physical beautiful, one of the least attractive people in the entire film. Similarly, Ronnie plays the protagonist, but he is so deluded and misguided that any perceived positive qualities are constantly underscored by the obvious negatives. Mixed in with some genuinely funny comedic writing, Observe and Report is set to be decently successful from the start; however, the film always seems to be self aware as well, which actually enhances the entire experience instead of detracts. The line that stands out to me is uttered in the police station by Ben Best, "I thought this was going to be funny, but it's actually kind of sad." The film shifts from humor to drama at the drop of a hat, and instead of feeling disjointed or out of place it actually meshes nicely simply because it is so off putting. Hill seems to know what he is doing with the writing and the film does not feel manipulative just to elicit a response, it seems to directly mirror Ronnie's character. Not to mention that, in a genius move, the film takes a pseudo-There Will Be Blood approach and has a finale that is cleverly shot as realistic but actually is a fabrication in the mind of the main character. Thankfully the writing here is so strong because, sadly, the technical aspects are nothing worth mentioning in any detail. The direction is mostly solid, but very few shots actually stand out as definitive marks of Hill's style. The film does have a nice sequence where Dennis and Ronnie are going around the mall causing havoc which is shot wonderfully though, and is also really funny. The lack of definitive direction is made up for with a pretty stellar soundtrack that features a ton of perfectly used songs. Still, the one that stands out the most is the song that is used in conjunction with the finale, the tipping point that solidifies the sequence as one of Ronnie's creation rather than any sort of reality. Next to Adventureland and Hannah Montana: The Movies, Observe and Report probably has the best soundtrack of the year, unless I am overlooking an obvious choice to two, which is fairly likely. On the whole, Observe and Report is much more than the sum of its parts. The film is not side splittingly funny throughout. The movie is not a revolutionary drama. It is not even the most in depth or amazing of character studies. Still, Observe and Report is one Hell of an experience that proves to be both casually entertaining and deceptively complex, depending on how a viewer decides to approach the film. There is a certain genius in the way the film is constructed and the way it was marketed. It is hardly a typical comedy, much like the year's stand out gem Adventureland, but it can exist as a fairly typical comedy. I am a sucker for these multi-layered films and Observe and Report is no exception. Now it looks like I need to go back and check out Hill's previous works since he apparently deals with similar ideas in both his television series and The Foot Fist Way.

Also I am on the old Twitter thing so I guess you can follow me at twitter.com/FLYmeatwad.
Posted by Rich Thorne at 11:15 AM