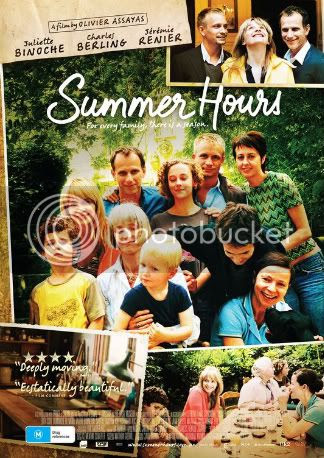 Summer Hours (Assayas, 2009)
So I reckon I should get this out of the way right now, I have not yet seen the French film from last year that is apparently part of this series, The Flight of the Red Balloon. Actually, my exposure to French cinema, both modern and the New Wave movement, is rather limited. However, as of this writing the only other French film I have seen this year, The Class, currently sits as my sixth best film released in 2009, so I found myself fairly excited as I sat down and went into Olivier Assayas' latest film, Summer Hours. Focusing on the surviving family of some French artist, I don't really get into these details because I do not know a damn thing about paintings and sculptures and stuff like that, in about a 100 minute run time, Summer Hours explores different concepts about loss and memory, along with the economic extension of real world circumstances that are important to more affluent families. While I knew little of the film upon entering, the first scene at the estate is a stylistic bang that really cements what proves to be an incredibly visually striking film. The first fifteen minutes or so set up the film and the characters so wonderfully that I found myself mostly swept up in the world being presented. 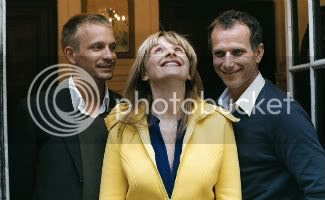 Being swept up, as I have said, is probably caused by, in no small part, the beautiful cinematography and masterful direction. Assayas does not employ the traditional handheld camera style that would seem like the obvious choice for this type of film, but he also does not make extensive use of a traditional camera style either. At numerous times the scenes feel a little contained, but the idea that these decisions were anything but intentional seems insane simply because the film just looks so professionally constructed. Not to mention that, when using more traditional wide shots, the film looks beautiful. Maybe the way it is shot is supposed to mirror the audience's expectations that these people are supposed to be free because of their social status and money, but in actuality they are just as trapped as 'average' people, yet there is still a noticeable beauty in the human experience. Either way, the film is also anchored by performances that range from really good to great. The standouts are obviously Juliette Binoche and Charles Berling, with Berling really delivering a stellar performance, but all of the supporters are pretty damn fantastic. The younger actors who play the children are also mighty impressive. However, the true mastery is only shown for a very short time, in the form of Edith Scob. She brings an elegant grace and knowledge to her role, despite it mostly being contained to the first portion of the film. 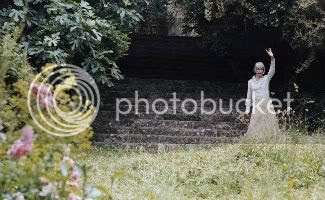 On the whole, Summer Hours is a pretty interesting experience. The film is almost deceptively complex, touching on numerous themes despite presenting them in seemingly simple circumstances. The film is both broad and specific, taking a brush and painting a portrait of both beauty and melancholy, blending the best of emotions at any given time. I should also mention that the final three scenes in the film are some of the most effective of any film so far this year. I find pinpointing a single reason for their success rather difficult, but I almost believe that part of the intention is that nothing in the film is as simple as one would imagine. Summer Hours is a truly touching film that, even for someone with my disposition, works on both an emotional level and actually builds up my faith in the human condition, however minor that construction may seem.

Also I am on the old Twitter thing so I guess you can follow me at twitter.com/FLYmeatwad.
Posted by Rich Thorne at 8:37 AM