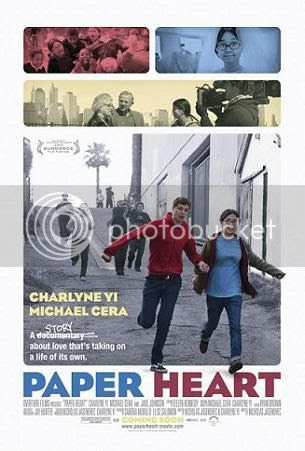 Paper Heart (Jasenovec, 2009)
In a year that has seen its fair share of incredible comedies and phenomenal documentaries, Paper Heart pulls both genres together, sits them in a room, and tells them to fight. In many ways this film is likely the physical result of the make up sex of that encounter. Featuring the infectiously endearing Charlene Yi as she travels across the globe in a quest to define love, Paper Heart sits somewhere between film and mockumentary with a noticeable grace. Now after seeing the film I am still not entirely sure what it should be classified as, the actual interviews seem to be genuine, but the film is clearly a fabrication. Regardless, the tactic is mighty interesting and plays with the notions that viewers have both of film and drama while adding to the questions about what is real and what is constructed when deal with the idea of love, so the film certainly succeeds in its assembly. 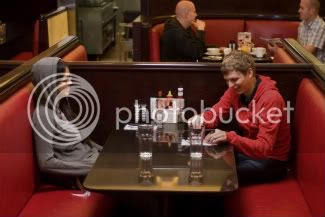 Speaking of constructed, the actors on display here are pretty fantastic. In many ways the only actor in the film is Jake Johnson as he plays the film's director, Nicholas Jasenovec, but I am fairly sure that each cast member in the film, that is the non interviewees, are all performing. Yi is spectacular, and she needs to be for the film to succeed at any level, but her real strength constantly seems to be her reluctance mixed with her curiosity. These traits keep the interviews compelling, but they also help build her character progressively throughout the film. Still, the obvious standout has to be Michael Cera. Cera plays an altered version of himself, seemingly embracing and challenging the notions of him always playing the same character, with tremendous humor and subtlety. Cera is mighty spectacular in the role, slightly reminiscent of his time on the Clark and Michael web series but also a good deal more refined. He does not play himself, Michael Cera plays the public perception of Michael Cera. 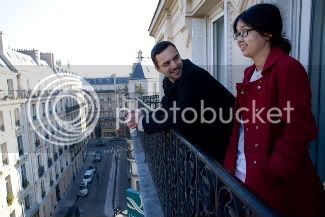 As for the technical aspects, the film is actually impressive as well. Designed to keep the viewer off guard, Paper Heart switches from overly documentary sequences, where the film grain is kicked up to enormous levels, to really beautiful and disciplined shots, like the walk through the forest between Yi and Johnson. However, the sequence that stands out would have to be the scenes in Paris. At the drop of a hat the film takes these entirely constructed sequences and switches the way they are presented almost instantaneously, which is even more impressive the more I look back on the film. However, the direction is not the only striking visual aspect showcased here. The film has numerous charming sequences where interviewees detail their own personal love stories while Yi animates the stories with hand crafted puppets. These scenes are some of the most visually striking of the film and are used to great effect. The film is also enhanced by the score, which is mighty top notch. 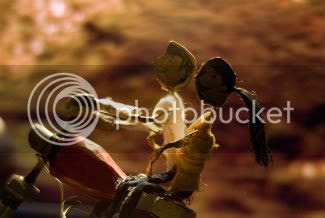 In many ways, Paper Heart is probably a comparable film to Bruno, and I would actually be interested in doing a follow up comparison of the two films so someone should make me do that in the near future, in the sense that both subvert a viewer's notions of what a docu/mockumentary should be and how the topics should be covered. Obviously, Paper Heart is more of a film than Bruno, and even more complex as I begin to write more and more about my short time, about an hour and a half, with the film, but they both share some downfalls as well. Not all of the interviews land and the laughs, though clearly there, are not as big as in a straight comedy. However, all of these minor problems are practically irrelevant when looking at the bigger picture. Paper Heart is a layered and complex film that does not only examine love, but examines the entire idea of fabricated realities. At first I was not entirely blown away by the film, but, as is the case with every great film, the more thought I allot to Paper Heart, the better the film appears. 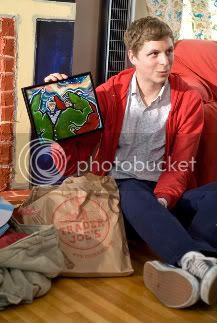 Also I am on the old Twitter thing so I guess you can follow me at twitter.com/FLYmeatwad.
Posted by Rich Thorne at 4:47 PM