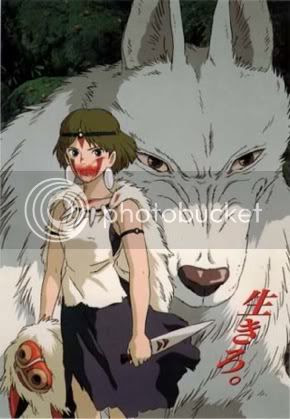 Princess Mononoke (Miyazaki, 1997)
Well, I suppose it is about time that I get to Miyazaki's crown gem, or what I assume is his crown gem considering that Spirited Away is not nearly that great. Going into Princess Mononoke I had only the film's reputation to go on as I did not know anything of the film's plot. Of course as I gazed down at my Netflix sleeve to see that the run time was listed as two hours and fourteen minutes I found myself pretty worried that this film was going to be a bit too long for its own good, after all, the best Miyazaki films are the shorter ones. Oh yes, I was also pretty sure that I heard this film dealt with some environmentalism crap, and since I have made it my mission in life to personally see my own carbon footprint before I die I was pretty sure that any overtly environmentally friendly themes would end up pissing me off. But hey, I'm an open minded kind of guy, so bring on the Mononoke! 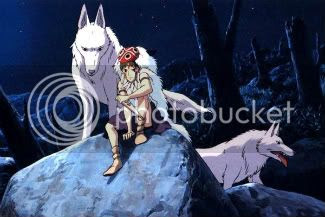 The first striking characteristic the film possesses, well aside from the visual aesthetic, is found in the form of the story. Now I do not use the word story in the sense that the word refers to plot, but rather I mean to say in the way the story is told. In many ways Princess Mononoke is a fairy tale, not unlike classic Disney films that focus on Princesses, albeit with much more characterization, as it possesses all the whimsy of a magical world existing in a mostly realistic setting. The world is really well established. The story is simple enough that it feels like it is being told instead of watched, a characteristic that is captured perfectly in the film, but I do not think designating Mononoke as a simple fairy tale completely does the film justice. In many ways Princess Mononoke feels more like a myth, lore passed down from generation to generation and being refined through each progressive telling of the tale. Now I'm sure I got this feeling because of the film's context, it does take place in historical Japan, I think, so the fact that it feels like a myth rather than a fairy tale is expected. However, what I found particularly fascinating was how it felt so culturally specific yet works so well for an audience member who is not a part of this culture. I think part of Miyazaki's ability is to craft and play with this universal magic without sacrificing the Japanese element of the film. In short, the way the story is presented is pretty wonderful. 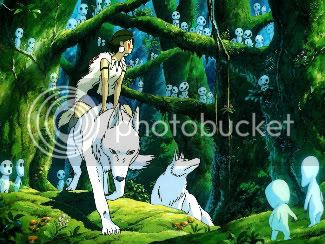 Of course that is not to say that the film is all whimsy and child friendly. The content is rather mature, limbs fly all over the place and blood plays a hefty part in Mononoke, but it is all handled so gracefully. And there is that little environmental aspect, but the film handles it more as a reverence that is nicely disguised to work with the time instead of being something that hits the viewer over the head. Plus the film does not take the whole 'all technology is terrible' route either, so I can definitely appreciate that given the way Miyazaki openly says that both sides can coexist peacefully. The film works as an allegory alright, but as a straight up film it works as well. The opening sequence is riveting and really all of the action sequences are high energy filled thrill rides. On top of that the film mostly nails all of the sombre moments as well, so I am mostly confident when I say that the run time, despite being a little lengthy, is not a detriment to the film at all, though I did need to take a break during the run time for what that is worth. Actually though it is refreshing to see an animated film willing to stretch out the run to over two hours, as most great animated films I generally want to see more of, so having Mononoke take on a lengthier feel, which also enhances the mythological epic feeling, was a wise choice. 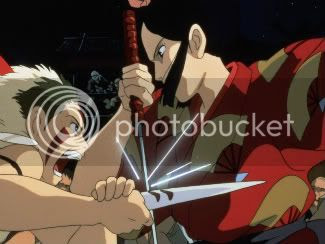 Speaking of animated films, all the technical aspects on display here are top notch. From character animation to the way scenes are drawn, the film is a visual power house. Obviously the imagination in the fantastic characters is going to stand out, Miyazaki has a way with designing these larger creatures that oozes originality, but the real strength is the way that he designs the worlds. The forests, the mountains, and the towns all have a believable beauty to them, not to mention that the traditionally drawn animals are incredible. However, to enhance these creatures, the ones that actually speak are voiced with an insane intensity that makes for numerous great voicing performances. Now I watched the film with subtitles so really all I could go on was how the lines were delivered, but even with this I found myself mostly swept away with the characters. A lot of effort apparently went into the dub as well, so I watched a few scenes with the American voice cast and I can mostly say that the quality of the voice acting there is at least on the level of the Japanese voices. The film, all around, sounds spectacular. Mix that with a brilliant score and the film records high marks in terms of technical quality as well. 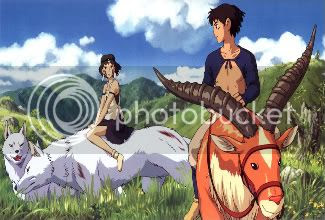 So by now it should be pretty obvious that I loved my time with Princess Mononoke. The film is mature, complex, and pretty much a master piece. It avoids the pitfalls that plague some of Miyazaki's lesser works like Spirited Away and Howl's Moving Castle, and I would have to say that it rivals My Neighbor Totoro and possibly even Porco Rosso as the best Miyazaki film that I have seen. Okay, well maybe not Porco Rosso, but I certainly love it as much as Totoro. Any minor problems that I found with Princess Mononoke have quickly been forgotten in one night's time and I am left remembering all of the breath taking positives. On the whole, the film seems to capture what is great about animation, both Eastern and Western, and I think for that alone Princess Mononoke deserves to be championed as an artistic accomplishment. Truly one of the best films ever made.

Also I am on the old Twitter thing so I guess you can follow me at twitter.com/FLYmeatwad.
Posted by Rich Thorne at 12:29 PM