Companionship Is Where You Find It, So I Take What I Can Get 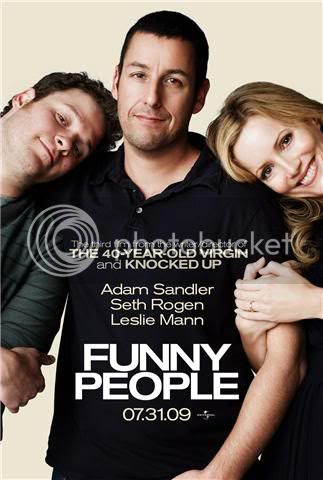 Funny People (Apatow, 2009)
After two major successes where he spent time at the helm, and what seems like a million 'Produced By' attachments to the end of trailers, Judd Apatow returns with the Adam Sandler and Seth Rogen vehicle Funny People. After seeing the trailer it seemed to be another formulaic Apatow film that was going to present the audience with a standard situation, heighten it up a bit, throw in some laughs, make things a little depressing, get a romance going on most of the time, and then wrap up nicely. Well, taking a page out of the Adventureland book to non-success, the trailer does not do the film much justice. The romance aspect of the film is but a footnote to the story of Ira and George, Rogen and Sandler respectively, and how these two men bond during the course of the film. Think I Love You, Man except better. The movie is about characters and comedy, not love and loss. 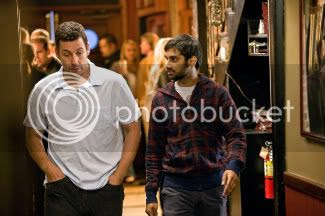 Clearly the film's greatest strength comes in the form of the lead actors. Both Rogen and Sandler are fantastically funny yet emotionally sound. Sandler has already shown his ability as an actor in Punch Drunk Love, but seeing Rogen be a bit more than what he was in Knocked Up was a nice change of pace. Sandler is the obvious stand out in the film, but Rogen mostly matches him blow for blow, as the comedian mindset the film explores makes necessary. As for the supporting cast, things are a little lack luster. Mann plays her same type of role, which is nice, Bana is pretty damn funny, Hill is mostly good is limited time, but Jason Schwartzman is clearly the best of the supporters. He plays his role of the gloating and arrogant friend realistically and perfectly, capturing what is so disgustingly human about, well, humans. As for Apatow's kids, they have worn out their welcome and really slow the film down when it has already lost steam. The two are not really funny, they are not really cute, and they do not do anything to enhance the film. 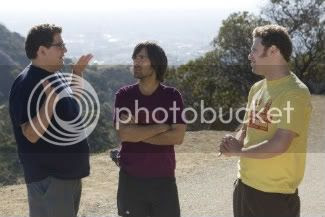 Speaking of losing steam, the film is phenomenally strong for the majority of the first hour and a half. Then the narrative decides it wants to take a prolonged stop in romantic comedy territory. For something that is so focused on how Seth and Sandler interact with each other, which is clearly the point of the film as the ending so clearly implies, the amount of time that Sandler spends needlessly wooing Mann is both sloppily integrated and pretty dull. Sure it adds in some laughs, but at the expense of a more complete narrative. The film is dark and comedic early on, it even seems to have the perfect opportunity to end when a line is delivered from an unexpected face, "Then what are you celebrating?" The film would have been a masterpiece if it just stopped. The script could have been altered slightly to tie up the Rogen/Sandler plot line and the film's tone would not have been undercut, but for some reason Apatow cannot do that. The 40 Year Old Virgin has similar problems, and Knocked Up has similar problems. Apatow just cannot write endings. 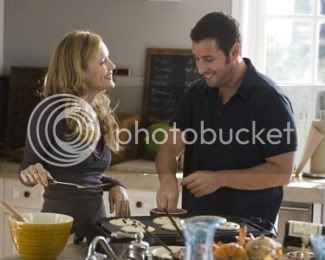 Thankfully he can work a camera. While the direction is not mind blowing, it does range from solid to really good on numerous occasions. Early on the opening scenes following Sandler are really great, the one wide shot where there are a few pineapple shaped trees on the lawn is pretty great, and the dinner scene is cool as well. Still, Apatow does not prove himself to be one of the best men working with a camera, but at the same time he also never does anything really bad with the camera, so I suppose that means this is mostly a wash. Probably not though because he has some really great parts, right? Sure, let's go with that. Okay, the direction is pretty good, I guess Judd can work a camera. Still, it's not his strong point, but the film still works fine without all that technical flair, mostly because of the first hour and a half. Mostly everything before the rom-com bits. 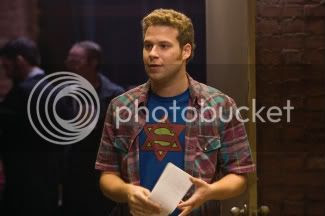 Damn romantic comedies. Damn advertising. Damn mismarketing. Damn it all. You want to laugh? Well then you're probably better off watching Judd's previous two films, of which The 40 Year Old Virgin is the funniest, but if you want to see Apatow's best film then you should probably see Funny People and just pretend that the bit after the celebration scene doesn't exist. Despite the film's failures, it proves to be the most complex of Apatow's films because it departs most radically from the common Apatow formula that the trailer implies. Funny People examines comedy, it examines humanity, and it tosses in enough penis jokes to appeal to the people who could care less about these two previous explorations. Is the film a transcendental comedy? No. But any film that presses the fourth wall like this while showing the potential to be a masterpiece is good in my book. Plus the bits where Adam Sandler just about openly mocks his career and almost admits that the majority of the films he acts in are shit is pretty great. Keep up the good work Judd, and just learn to write a little less generic.

Also I am on the old Twitter thing so I guess you can follow me at twitter.com/FLYmeatwad.
Posted by Rich Thorne at 11:53 AM