Turn The Bunsen Burner On. My Creation Comes Alive 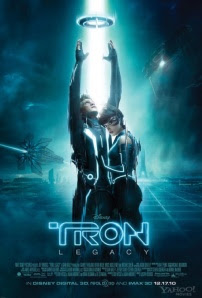 Earlier in the year we had princes of Persia, men made of iron, ogres in quadruple, more vampires, and dream theft. All, in their own way, disappointments, at least of the ones I had the unfortunate chance to view (so all except Shrek, Twilight and Prince of Persia). Without the potential promise of a Nolan at the helm or the inclusion of a Robert Downey Junior in front of the camera I placed on my 3-D glasses with great hesitancy as this sequel to a film I have only tangentially experienced through Kingdom Hearts II displayed the oddest warning about 3-D versus 2-D presentation typed itself across the screen. So without any of these draws, without this background knowledge, with all these warnings could TRON turn in a strong showing or make me wish I had been derezed?


What stands out about the latest film with ties to the Mouse House is not, as one may suspect, the stellar art design, transcending the previous look of TRON in favor for a much more stylized, slickly contemporary video game look. No, what really stands out is the incredible sound design, perfectly mixed to bring life to a world that, for the majority of viewers, is likely unimaginable and alien. The metallic sounds, the movement of the vehicles, the clicking of circuits, it all remains understated while still being integral to the experience as a whole. The Daft Punk soundtrack was highly touted leading up to the film's release, but the star is the sound mixing and editing, two categories that it should be acknowledged for in a few months when Oscars roll around. But beyond this what stands out, perhaps even more, is the composition of frames. The director makes incredible use of symmetry to establish the highly mechanized world in which these individuals inhabit. All of these aspects seem to fire in perfect unison, making for a startlingly superb technical thrill ride.

But a film can have all the technical prowess it desires, if those aspects do not feed in to a higher purpose then a film is likely to flounder. What TRON: Legacy gets correct is keeping the core story incredibly bare bones and then adding on to these common themes (father and son reunite, stopping evil from taking the world) by layering a bit more subtext. The thoughts that are spouted off by the older Flynn force the story to turn its attention away from the generic evil that is found in Clu and focus it on humanity's quest for perfection. It is through this search that much of the narrative weight is present, and while the movie does not do a great job of establishing exactly what Clu could do if he escapes, at least not until the very last scene when we see transference from the grid back to the real world, the twisted pursuit of his goal and the havoc he has wreaked on the grid does establish the potential threat of what may be possible if he escapes.

The film is brilliant in the way that it balances tremendous action alongside these higher, albeit overly dramatized, concepts. The film simply continues going, which I find incredibly admirable. By constantly expanding the scope of the ideas it tackles, all very well integrated into the fiction and narrative, the film starts to become existential. What is perfection? How does humanity develop? Do we need help? How do we exist? What can imperfection mean in the pursuit of perfection? Granted these ideas are not always handled completely, but the presence of such concepts in a film of this magnitude are incredibly refreshing. By having creations taking on human forms and still exploring the meaning of existence, of problems and conflicts that have spurred some of the largest conflicts of mankind, the film reaches a level of near brilliance without sacrificing the fun of a large scale action flick or existing as too serious. The main conflict is also genius in the way it has man take on himself, while still externalizing the conflict on a large scale level. Truly tremendous construction that holds a startling amount of narrative weight.

I was not sure how I would respond to TRON going in to the film, but the solid acting across the board, with some highlights breaking that solid descriptor, keeps the film moving and constantly developing in a way that nearly mirrors the more successful parts of the Star Wars franchise. On top of all that I do not feel as if I was ever lost because I did not see the original film, yet this one never was weighed down by exposition. TRON is plenty full of flaws, but despite it all the film still manages to be much more than a simple thrill ride and, when it comes down to it, we need more mainstream films like TRON: Legacy.

Forever off the grid,