So How Did You Get Here Under My Skin? 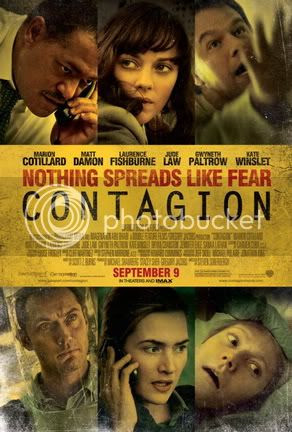 At times while watching Steven Soderbergh's latest film, Contagion, I could not help like feeling that it had topically missed its mark. As a member of the United States I have lived through a few biological scares, but the most recent one seems to be so far in the past that I hardly consider the extremity or fear that is bred during a disease scare. I have never been directly affected, and the sensationalist media has always made me think that these bird flu and swine flu scares are simply hyped up contained cases that will be easily controlled by the world's vast medical technology. What Soderbergh is tasked with doing then is not only making me believe that these very real diseases could be...well, real, but he must also turn a vastly biological affair in to a gripping story. So after focusing on a singular individuals in his last three films (Che, The Informant!, and The Girlfriend Experience) can Soderbergh expand, as he has with other films such as Traffic and the Oceans series, once more to encompass a global scare?

In short the answer to that question is a simple yes, but reducing the film's success to a single reply would easily belie the complexity and craft that Soderbergh showcases in his latest horror film. Though I suppose it may be easier labeled as a thriller, it seems to me that - through my limited experience with the horror genre - Soderbergh is certainly going for a vibe that highlights the terror of the situation. Basically the world is being overrun by an epidemic and the scientists need to find a way to contain and cure the mystery disease. These moments are incredibly clinical, often slower moving sequences where the characters quite literally explain some of the mechanics behind how diseases are created and spread in order to establish the film's stakes as being incredibly heightened. These scenes are balanced by the more personal sequences where family life is seen through the eyes of Mitch (Matt Damon), the husband of the first woman to die of the this new virus.

While Damon gives a great performance as Mitch, the rest of the ensemble is overflowing with talent. Jude Law, as a shifty blogger who seems to have the inside knowledge on how this disease operates, Laurence Fishburne, and Kate Winslet (in likely the film's best performance) are the other most notable names who get the majority of the heavy lifting, while John Hawkes and Marion Cotillard are other big names present in the film. However, in the case of Hawkes and Cotillard, both seem to be wasted in this film. Neither of their story lines are fleshed out and, in a film where every other aspect seems so intricately connected, these individuals seem to be nothing more than plot devices overtly used to help the audience accept or question the actions of other characters. And in what may be Soderbergh having a bit of fun with the audience, perhaps the most important character in the film is Irina, played by a completely new actress (Daria Strokus). By bouncing around from perspective to perspective, the movie widens the scope and the urgency of these scientists to engineer a cure.

What puzzled me about the film, and this ties back to the way that the ensemble is used, is how much of this film is meant to be overly serious. Though the film is steeped in reality, but at times I felt as if Soderbergh was veering away from a horror film and transforming Contagion in to a B Movie similar to 2010's Splice where a mostly believable scenario is ratcheted up to extremes in order to explore specific idea, in this case the constant danger we as humans constantly put ourselves in without thinking twice about these actions. Specifically, the casting of Demetri Martin and Bryan Cranston seem more like stunt casting opportunities when compared to the rest of the cast. Combined with an appropriately bombastic score, which works incredibly well in conjunction with the film's tone, and some overly generic, stark, eerie fonts to convey the passage of days and it occasionally feels as if the film is straddling two identities.

But this gripe is only minor when the rest of the film is so riveting. The greatest accomplishment of Soderbergh's latest feature is likely just how terrifying many of the realizations are without the film itself ever needing to rely on direct scares to create this mood. Amid a sea of wonderful montages, Soderbergh is able to make for one of the year's more interesting films to get a wide release. It's slow moving and methodical, but in this method Soderbergh still is able to experiment with the way information and perspective are portrayed. The world would be a lot better if more films were like Contagion.

I didn't discuss the visuals too much in this review, but Soderbergh's camera work is almost as great as the editing on display. In fact, the final montage may be the best part of the entire film, both in relation to theme and technical execution.