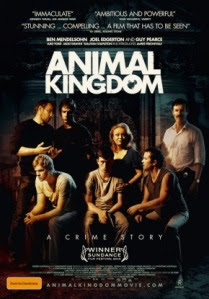 "Every morning in Africa a gazelle awakens knowing it must today run faster than the fastest lion or it will be eaten. Every morning a lion awakens knowing it must outrun the slowest gazelle or it will starve. It matters not whether you are a gazelle or a lion, when the sun rises you had better be running." This African proverb seems to perfectly encapsulates the world of David Michod's Australian crime drama Animal Kingdom. The people in this film, whether cops or criminals, are always running from, or after, one another in an attempt to keep balance in Melbourne, Australia. The world is a bitter struggle for comfort and survival, two ideas the film explores in great depth.

As of late global cinema has seemingly taken a turn toward the gangster films of old, a trait that no doubt makes Martin Scorsese and other like minded filmmakers incredibly pleased, but when you have so many similar films being made it becomes incredibly easy for the market to become over saturated and leaving films, regardless of quality, appearing incredibly tiresome. However, Australian crime drama Animal Kingdom, from director David Michod, is hardly a crime film in the way that A Prophet or Gamorrah are crime films. The world Michod displays is, for lack of a better buzzword, as gritty as the worlds in those two films, but the action here is much more quick paced while remaining incredibly spread out. In many ways the film has a plan, one that hopes to explore some higher ideas than either of the films previously mentioned, so the cast expands and the action happens much more sporadically, a perfect pairing for the realism the film attempts to capture. But without a clearly defined goal in mind, and with uneven action, is Animal Kingdom at the top of the 2010 food chain or is it better off being thrown to the lions?

The film establishes itself in two ways: the first is by showing a portrait of lions, effectively setting up a metaphor that runs throughout the rest of the film, while the second is in the opening scene when the central figure J (James Frecheville) watches television with his apparently sleeping mother before she is taken away by paramedics for overdosing on heroin, effectively setting a consistent tone. ﻿And through the conflicts these ideas remain completely intact; however, the meditative way that the film works, generally employing minimal score to enhance tension and provide much needed breaks to soak in the action on screen, is also conducive of incredibly reserved, and for the most part incredibly pedestrian, camerawork.

Luckily the performances in the film, and for the most part the characters on display, are compelling enough to forgive the technical deficiencies. Though I ultimately where the meat of the film rests, or rather where the meat of the film should be, is in the ideas explored. Ultimately Animal Kingdom explores the notion of social confinement and entrapment. Jackie Weaver plays the family's matriarch, and through her performance she serves both as a tag-a-long figure for the fast life the boys lead and also as a ballast, holding together these parts with more strength than any of the others individually. She does turn in a wonderful performance, unfortunately the other central character, J, is so detached from the situation that identifying with him anytime he is on screen is incredibly difficult. Though his performance serves a purpose, it does enhance the central concept of the film, echoing the detached nature and confinement the character feels, so I can confidently overlook the black hole that is Jay for nearly all but the final twenty minutes of the film. The performance that stood out to me, both for the humanity and the service to theme, was Laura Wheelwright as Jay's girlfriend Nicky Henry. She offers an escape for J, at least a temporary one, but once you become a part of this world you must always run, and, in an attempt to avoid spoilers for one single plot point, Nicky eventually succumbs, in some manner, to this type of life.

I was not wrapped up in Animal Kingdom as I had hoped, but as I write about the film I find myself a bit more compelled by the ideas than I had thought. Yet I have trouble recalling, even a day after seeing the film, many stellar aspects. But the film is by no means bad and, at the very least, certainly worth watching. On a conceptual level the movie is incredibly interesting, and it may have just been my bloated expectations, but Animal Kingdom would clearly stand among the crowd if we were at the ceremony on Pride Rock.