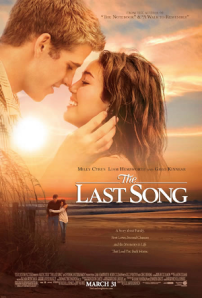 A common complaint leveled against the present day Hollywood system deals with the lack of originality. Every film seems to exist as a remake or an adaptation, leaving creative filmmakers in the dust and keeping a fine control over exactly what ideas and perspectives are brought to a wide audience. While I do not find the constant desire to remake films or adapt existing franchises to the screen as a necessarily bad tactic, when looking at a film like the Last Song, based on a Nicholas Sparks novel that at the time of filming was still a work in progress, certainly could have used a bit more originality, and a much larger injection of creativity. But many films have enough intangibles to transcend typical flaws, so can the Miley Cyrus factor shoulder the weight of the film on her shoulders?

The film follows a summer in the life of moody teenager Ronnie, played by Miley Cyrus, as she visits her father at his coastal house in Small, Town USA - essentially. She has had run-ins with the law in the past, she appears to have cast aside plans to attend Julliard after high school, despite the school actively pursuing her even though she bombed the SATs (these do not really matter at that type of school, do they?), and overall she hates where she is at the current point in time. For the most part the film presents a story that has been told before, and the introduction of a love interest, eventually complicated by his past, is not a revolutionary story telling tactic, but these traditional devices are hardly grounds to fault the film. All these aspects can easily be redeemed by the cast or the larger concepts that the film explores.

And for the most part the cast is incredibly solid. Cyrus does a tremendous job in the Ronnie role, demonstrating a range of emotion and effectively selling all of the changes that one would expect the character to go through during the course of the movie. Though for me the real surprise was Greg Keener playing the part of Ronnie's father. He needs to come across as repentant, but also firm and fatherly, and Keener finds a perfect balance that brings a shot of life to what proves to be an incredibly important character both in regard to plot and to Ronnie's development. Where the film falls short, which is odd considering the real life relationship between Cyrus and her co-star Liam Hemsworth, the film flounders most of the time the two share the screen. Outside of a wonderful montage early on in their relationship, Hemsworth's acting comes across as incredibly wooden, which makes selling the central romance, one that the film's script sets up nicely enough, an arduous task.

Even beyond the lack of chemistry between the two leads, I find the major disconnect of the film to come not from the cast or script, but from the overall concept. The story that the Last Song tells is so incredibly specific, and because it deals with so many ideas at once these concepts do not have the necessary room to breathe, which hinders them from relating to the world as a whole. the Last Song simply displays a relationship, it does not offer any insight about connection or romance, aside from a very small bit toward the end that is undermined by the film's need to tend to all the other plot lines. I had not imagined that this film would be problematic because it attempted to take on too many ideas, and quite honestly I do think I would prefer a film to be incredibly basic and fully flesh out one idea in an interesting way rather than be too ambitious and end up far too basic.

In many ways I find myself incredibly disappointed with the Last Song, especially after being taken with other teen sensation vehicles from this year (Remember Me and Ramona and Beezus), but at its worst, and perhaps even at its best, the Last Song is completely unoffensive and dreadfully pedestrian. As a vehicle for Miley Cyrus the film works spectacularly, and I would have little hesitation in handing the keys over to her for another, more distinctively different, film for her as she attempts to shed the Disney Channel star label that propelled her to fame. The film tends to find itself stuck in a teenage mindset that more is better, which, much like protagonist Ronnie, could use some time to figure out that, more often than not, less is generally more when crafting great cinema.