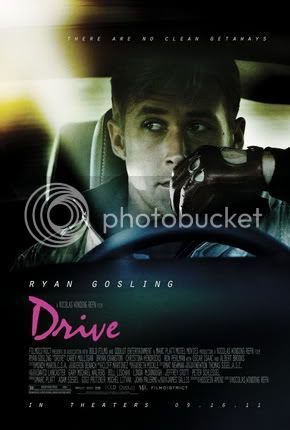 I love driving. I don't enjoy gas prices or the idea of potentially stepping into a metallic death trap each time I get behind the wheel, but there's an undeniable allure for me of being insulated in a world full of music. A personal retreat for my mind. It is with this attitude that I approached Drive, Nicolas Winding Refn's Cannes award winning art house affair that chronicles an episode in a nameless driver's life. Here's the thing though, I don't really care for cars all that much. So as the film started playing I really was unsure exactly what I was going to be getting from this much buzzed about genre film. And you know what, even though I don't think that I benefited from knowing very little about the specifics of Drive, I would not blame you for waiting to read this - or any other - review of the film before checking it out. If you want to preserve that surprise then know this: Drive is great and you need to see it. And now, let's light this candle.

Watching the advertisements for the film I had partially expected to be met with a high octane genre movie, but those sorts of films do not win Best Director awards at Cannes. At the very least Winding Refn, who is probably most famous for his absolutely insane film Bronson that served both as an exercise in sleek style as much as it acted as a catapult for the current success of Tom Hardy, does not appear to make simple films. And despite the languid pacing of Drive - and at times the film slows down to almost glacial proportions as the Driver simply drives - this film is hardly simple. Sure the premise (Driver meets girl, Driver gets in trouble, Driver kills people) is fairly standard, but the execution is where Winding Refn is able to shine.

I have always found the most entertaining parts of going to the movies is when all aspects of a film are working in perfect harmony to create a visceral (hey, it sounds like I'm writing about video games again!) thrill. And what's so brilliant is that Drive does this almost entirely throughout its run. Each scene that Winding Refn sets up here is expertly assembled, but what helps ratchet up the intensity are the cuts, and most of all the wonderful soundtrack. Each track that plays, full of delightfully on-the-nose lyrics that would be laughable in most contexts, fills the frames with a concentrated burst of life that adds to our understanding of how the Driver is perceiving his actions as super sleek and justified. The soundtrack, and the film as a whole, is as delightful as it is unsettling.

Unsettling, I would say, in no small part thanks to the way that the violence is carefully parceled out amid the long stretches of emotion. The violence I don't think ever becomes unbearable, but the way the gore is deployed is usually in a manner that borders on revelry. It acts as another window in to the essence of the Driver. In a way he's a hero, at least that's how the film frames him, but the movie made me sit with his deplorable actions and instead frames him as a man who was always on the edge of becoming a murderer. Though Gosling's performance was hit or miss for me, and he certainly is more accomplished than the emotional sinkhole that is Carey Mulligan, there is one beautifully deranged look that subtly creeps along the Driver's face as what will likely be the film's most iconic scene (hint! It's the elevator scene in the trailer!) that allows Gosling to shine.

If ever a 2011 film deserved (and will probably get) a spoiler post where I can muse on all the wonderful intricacies it's probably The Tree of Life or Uncle Boonmee Who Can Recall His Past Lives; however, it's another Cannes winner that will probably eventually get that post. Drive is not my favorite film of the year, but it's a damn fine cinematic delight that must be experienced. The script occasionally lulls, I wasn't exactly won over by the two leads, but these gripes seem minor in comparison to what I found to be one of the most surprisingly enjoyable films of the year thus far. The style might (slightly) outweigh the substance here, but sometimes you see a film that simply resonates. It reminds you why you love modern film, and Drive certainly sparked that flame.

I didn't really get in to the performances too much, but all the supporting turns are mighty fantastic. I especially loved Ron Perlman. In a movie full of nuanced performances he could easily slip in to caricature, but he plays his role as an all too greedy criminal perfectly. He ain't just Hellboy, this guy needs more work!

Buy this soundtrack. That is all.