Don't Give Up Now, Just A Little More Persistence 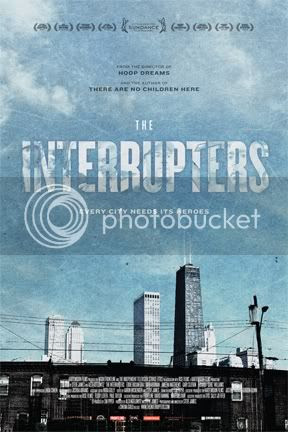 Over the summer I visited Chicago for a weekend. While I was aware that I had not actually even scratched the surface of what the city has to offer, after seeing a film like The Interrupters I almost feel as if I should have taken even more precautions as I walked a very standard pass through the city. Actually, as I exited the theater in Philadelphia and I walked back toward the train station to get home I almost felt a bit more paranoid than I should have given the time of day and relatively safe area of the city. But as I continued down the streets, looking all around and moving at a quicker clip than I normally would, I became cognizant of my actions. I was acting this way because of the documentary I had just watched.


Coming from Steve James, the mind that brought you - and I suppose me - Hoop Dreams, we have another documentary that examines a level of society that is usually fragmented and stereotyped. However, the approach that The Interrupters takes is where the film finds most of its strength. Instead of focusing on the horror and the travesty by following the individuals creating the violence in the streets of Chicago the film shifts its gaze to zone in on those who attempt to stop killings. This group of individuals known as Ceasefire, generally made up of former criminals who have attempt to change their lives by preventing needless deaths, are made up of violence interrupters. The organization itself is sizable, as becomes more and more apparent each time we are shown how large their group meetings can get, but rather than approaching the organization as the whole the film becomes more personal by following three specific interrupters as they patrol the city streets.

Structurally the documentary has us going through the four seasons of the year. This allows time to feel as if its constantly moving, and it also helps document a sense of growth. I know the comparison seems out of place, but I actually found that the film's narrative style functions similarly to the HBO series Game of Thrones where, just as we settle in to one character's narrative we are left wanting more because a cut is made to a different story line. And for the most part each of the story lines are equally compelling. Cobe Williams is compelling to watch because of how relaxed he seems in the face of danger, while Eddie Bocanegra is not as compelling of a personality but remains interesting because of how he still struggles with his past as he works with children who are actively attempting to transcend their communities. But the real powerhouse of the film has to be Ameena Matthews. The bulk of her story is spent trying to change the downward spiral of an eighteen year old girl who has bounced around a number of temporary homes. It seems inevitable that on a large scale these three people are not going to solve all of the city's problems, but sometimes it's the small personal victories that cause the large scale change.

However, despite the film being entertaining, at least as much as a two hour documentary that focuses on widespread homicide can be, I continue to have trouble with the success of the documentary itself. I realize that, much like Hoop Dreams, James is giving us the incredibly personal and specific to explore themes that are prevalent throughout America, and there are points where individuals in the film even directly address the disease of violence in the entire country, but the film feels so overtly manipulative that I found myself put off by many of the emotional hooks. I am also not incredibly sure it makes me want to do anything about these problems; instead, I mostly just revert to more paranoia about my personal safety. As a whole, the film does not seem to have a single, clear message. By being a tale of redemption, a public awareness campaign for a nationwide problem, and a spotlight on these three individuals the documentary is - once again, like Hoop Dreams - a hodgepodge of embryonic themes that could have used more time in order to properly develop.

A strong documentary, and a strong film, allows me to connect back to the real world. In fact, it extends beyond even that, it allows me to better understand my place in the world, to better process the way the world functions. As I walked back to the train station after seeing The Interrupters I did realize that I was thinking about my surroundings differently because of the film, but I was not considering it in a way that was productive. I feel with a film like this it's easy to like because if you don't it can seem that you are belittling the actual people who are doing noble work. Perhaps I am heartless because I did not fall in love with The Interrupters, but despite being passably interesting the film is too ambitious and convoluted to approach the greatness that is achieves at its best moments.

Aside from being overused when James wants to ratchet up the emotional intensity, the score and soundtrack in this film are mostly great.

I also believe this is a film tailor made to win an Oscar. If I could bet right now, with odds, on what will win Best Documentary, I would put all my money on The Interrupters.


And if you want to know what I'm watching, listening to, playing , and reading you can follow my tumblr account!
© 2011 Richard James Thorne
Posted by Rich Thorne at 9:54 AM