I Just Want You To Know, I Can See Through Your Masks 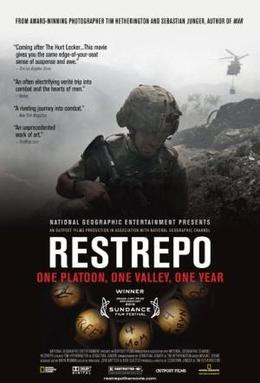 Cinema offers viewers the ability to visit different landscapes, different worlds, different universes; however, these journeys are usually kept within the confines of a constructed reality, a world that exists on the reels of film and perhaps in our minds, but not in our 'world.' Documentaries still create this barrier, but the realism of the genre is at worst an examination of a world that many of us are unaware of and are, at best, a portrayal of some truth that all great films can reach. I have not, and likely will not, travel to Afghanistan in my lifetime, nor do I plan on fighting in any literal wars, so Restrepo's portrait in to life during wartime in one of the world's most dangerous conflict zones makes an attempt at capturing the spirit of men tied together by a desire for combat.

Much like2009's The Hurt Locker the film explores, at times, the notion of these men experiencing highs, being lured by the thrill of combat, by the excitement of battle. I will not pretend to know what this experience is like, so perhaps the film accurately captured the feelings of these men, certainly it did well in establishing the dangers of war, but as the groups trudged along from camp to village I felt a large disconnect. In setting up the emotional pull of the film, the death of Restrepo and the establishment of a camp in his name, we see some footage of the man, and this opening minute is one of the most entertaining in the film, but his presence is lost the more the film advances. He becomes a name, war becomes dull, and the whole film becomes depressing. What is at the heart of the film, it seems, are the ties that bind individuals. The scenes in the camp where the men are clowning around are fun to watch, but that simply makes for overdone juxtaposition without much effect.

As expected in a National Geographic production we have high quality camera work, but the film simply lacks any sort of emotional or narrative pull, it exists in a bubble. Perhaps like war itself, maybe we are meant to feel alienated. The problem that seems prevalent throughout the film is that it never asks the viewer to consider these actions on a larger scale. We should sympathize with the excitement of these men as they talk about killing other humans, but we should feel bad when they are injured? We are supposed to wonder how they will live outside of war, but we rarely seem them out of this context. I do not mean to diminish the effort of these men in relation to my own freedom, but the film does not ask questions. Effective documentaries do not simply document, they explore, which is where Restrepo stumbles.

As a series of vignettes, each documenting a reality many are unaware of, the film succeeds. But a successful documentary needs more than vignettes, it needs the camera needs to become the subject, it needs that camera to discovery. Otherwise the film becomes more like Restrepo, a casual, mostly dull, journey to an unfamiliar world. These trips may not be without interest, they may not be without value, but they do seem to be without purpose. Restrepo has enough portions to make the film entertaining, but hollow entertainment is not the purpose of a documentary, it's not even the purpose of film.