To Share On Our Journey With All Of Mankind 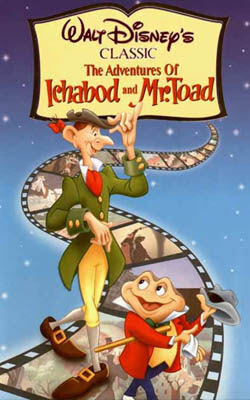 The Adventures of Ichabod and Mr. Toad (Algar, Geronimi, Kinney, 1949)
Thus far, the theme of this marathon for me can be summed up in one word: discovery. Whether discovering great new films like Melody Time or Song of the South, rediscovering and being able to notice what is so great about Bambi, or discovering that I was never off the mark to begin with, ala Fantasia, I can say with confidence that I have discovered a good amount by revisiting the Disney Animation Stuido's compendium. So it is only fitting that this next film is one that basically allows for all types of discovery.

I have come across a film that, for all intents and purposes, should be very close to my heart. When I went to Walt Disney World as a child my favorite ride was always Mr. Toad's Wild Ride. Then it was shut down and my spirit was crushed like Smarty Jones's hopes at a triple crown after losing the final race. Despite loving the ride, I had never watched The Wind in the Willows short that gave rise to this attraction. On the other side, I had, and likely still do have, a VHS copy of The Legend of Sleepy Hollow and I watched it about once a week as a younger child. Still, it has been years since I have watched that short film and I like to think that my tastes have refined a bit since then. 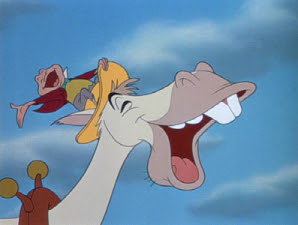 Oddly, after spending some time with the film, and taking a day or so to reflect on what exactly I had just watched, I found that my expectation, that I would be able to confidently say that Ichabod makes for the better segment, is mostly wrong. So that brings me to The Wind and the Willows. Starting off like a simple story, which splendid narration to boot, once the introductions are finished and we get straight into the characters actually being characters the film picks up considerably. The animation is really nice and a number of the shots are absolutely brilliant, but the strength comes in the voice acting. Comedy hits just about every time it is used and the performances from each actor make for some really entertaining dialogue.

Along with the dialogue, the music is really integrated into the story pretty well and is a nice precursor to the more modern Disney musicals and less like the classics. The action sequences are pretty thrilling as well and then there is the whole commentary on the justice system that is juxtaposed beautifully with the comedic world. It's a really carefully constructed film that is a blast to watch and I can certainly see myself revisiting this one in the future to see not only how well it holds up to repeat viewings, but to also see what other subtleties I may have missed. Not to mention that the characters are just fun.

Jumping from fun, or as fun as a bunch of weasels getting drunk can be, to the more macabre, we hop across the pond for a bit of American fiction. Much like The Wind in the Willows, the narration here is pretty fantastic and, I would contest, is what saves the film from being pretty bad on numerous occasions. The character animation, aside from Crane, is pretty standard, and the scenes leading up to the party are all downright ugly, it's like Disney forgot how to draw. The music is good throughout, but that's mostly Crosby's doing as it really never really separates from the story telling quality into the film story that The Wind in the Willows employs, and the story is a personal favorite so I cannot complain there, but I would have liked it more if the film had actually broken the narrative aspect and simply introduced the characters and started developing them a bit, like the characters in the Mr. Toad tale.

Unlike in the Mr. Toad story, here I felt like I would be just as well off reading the Sleepy Hollow tale. Up until the party and chase sequence though the film is simply passably watchable and proves to be the lowest point of the film as a whole. However, the party until the film's end is absolutely brilliant and because the story is so short it makes it worth watching.

Ultimately, this film is nothing more than a standard package film without too much depth, aside from the commentary in the Mr. Toad story and the animation toward the end that makes for a truly diabolical Sleepy Hollow tale. I could see myself listening to Crosby's songs on my downtime, but I can see that with a ton of Disney films, so despite him having a really good voice and helping to make what could otherwise be a dull film watchable until it picks up I do not think that is enough for me to say that the Ichabod Crane adventure is anything special. Actually, as a whole I do not think that the film is anything special and, taking it as a package film, Disney could hardly end on a higher note than Melody Time, but for an enjoyable watch that is a tad above pretty good, this film succeeds.

I should also state that, unlike Fun and Fancy Free, the pacing here is brilliant and neither segment overstays nor under stays its welcome. Sadly, this also means we lose out on those hysterical puppets, but at the expense of a better film, so I guess it all works out. I suppose that's it for the package films. My floors are dirty...bring on Cinderella!

The Adventures of Ichabod and Mr. Toad achieves a 7.9 out of 17, with 0 being Fantasia, 8 being my recollection of another specific film in this marathon that will be revealed when it has been watched, and 17 representing how great Hercules is based on my most recent watching, which was likely over the summer, or winter break.

Also I am on the old Twitter thing so I guess you can follow me at twitter.com/FLYmeatwad.
Posted by Rich Thorne at 11:56 AM