I Know What My Weaknesses Are, Probably Better Than You Do 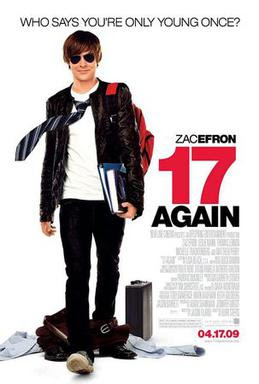 17 Again (Steers, 2009)
Going into this film I found myself rather skeptical. Zac Efron headlined those High School Musical films which were, to be slightly positive, rather underwhelming and mostly dull musicals. He also left me really alienated and I was not really impressed with the performances that he gave in any of the three films. So when this movie opens up with Mr. Efron clad in a sports uniform taking basketball shots I was ready to write the film off as a shameless attempt to back pack off the High School Musical success. But then Jim Gaffigan shows up and things start to get weird. The movie starts getting kind of funny, but then a big college scout is coming to check out Zac's character Mike, yet he just can't get his head in the game because his girlfriend told him something that upset him. What is it though? Well, it does not take a long time to find out. She is pregnant. Cue Matthew Perry as older, depressed, soon to be divorced Michael. And meet his rich, nerdy, Star Wars loving best buddy Ned. But don't get used to Perry because we are given just enough time to get to know the situation before things get all crazy and Zac Efron is back on screen. The plot is pretty basic. 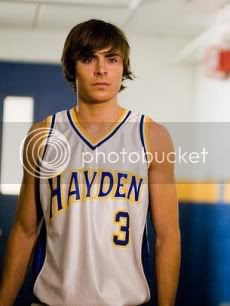 Thankfully, the film is anchored by a ton of interesting aspects that distance the film from obvious comparisons that are to be drawn. 17 Again is not another Freak Friday clone, it is not a High School Musical rip off, it is not the poor man's Mean Girls; 17 Again is a better film than any of those three could ever hope to be for a variety of reasons. However, the most noticeable reason for this film's success comes, surprisingly, in the form of Zac Efron. Not only does he convey an incredibly striking slick and collected demeanor during the majority of the film, a swagger of impressive ability, but the role asks that he be able to show a range of believable emotion that would challenge the most accomplished of actors. The fact that he handles the role with such care, humanity, and brilliance cements him as one of the year's best performers so far. To say that I was floored with what Efron does in the role is an understatement, he hits every note in the film pitch perfectly. 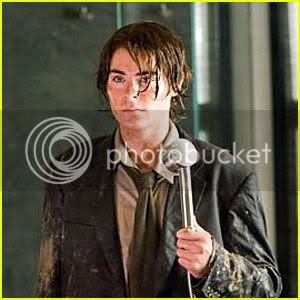 Of course the supporting cast all are pretty solid as well and help Efron transition seamlessly in and out of the straight man/funny man role depending on whom he interacts with at any point in the film. Leslie Mann is charming as Mike's wife, Scarlett, and she is likely the strongest of the supporting actors. Seeing Thomas Lennon, following up a small but funny bit in I Love You, Man, as the eccentric best friend Ned was great and just about all of his comedic parts hit. He is pretty hysterical in the film and has the most memorable lines. 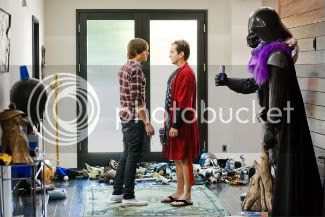 Well, at least in quantity because nothing beats Sterling Knight's "Yeah, I'd shake your hand, but it's taped to my ass," line. Actually, seeing Sterling Knight here kind of caught me off guard because he looks so different from how he looks in other recent works, despite this being a 2009 film. For those unaware, Knight is a co-star on Demi Lovato's Disney Channel series Sonny With A Chance where he plays the arrogant Chad Dylan Cooper, quite brilliantly I may add. Seeing Knight here in a completely different role, giving a Michael Cera~esque performance, shows that he is a versatile young actor and has me interested to see what else he does in the future. His performance here is slightly erratic, but seeing him branch out slightly is reassuring. However, the final major supporting cast member, Michelle Trachtenberg, looks pretty enough in her limited screen time to keep the viewer from noticing that she really does not do all that much, well aside from a funny quasi-incest scene. 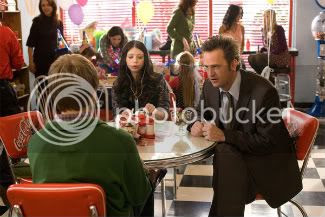 Speaking of humor, that aspect is another of the film's strong points. The comedic scope is broad, the previously mentioned scene also features Trachtenberg slightly breaking the fourth wall as she question's Mike's, and by extension addresses the questions about Efron's, sexuality in regard to his appearance. But the film also has a fair amount of slap stick, a ton of pop culture references, some witty one lines, and just generic jokes scattered about to keep the film fresh. Which is good because, aside from the acting and the script, the film does not have too much else going on to make the experience compelling. The direction, despite having a few really great shots, is standard and hardly distinctive. From a technical perspective the film falls flat. Still, the script and cast are strong enough to easily transcend this technical mediocrity, much like Hannah Montana: The Movie. 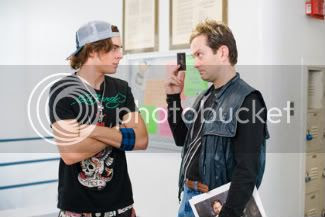 In fact, 17 Again possesses many of the same charms that a film like Hannah Montana possesses*. Substitute Miley's music for Zac's dancing and dribbling, add in a bit more humor but less drama, and keep both film's standard in most technical aspects and, much like Hannah Montana: The Movie, 17 Again proves to be the high point of escapist entertainment. Marked by a surprisingly great performance by Zac Efron, 17 Again has to be one of my most overlooked films in recent memory, echoing a lot of things found in Mean Girls but lost upon my second viewing. I do think this film actually has enough to it that would allow it to hold up during a second viewing though, and I hope I am able to revisit 17 Again in the future. More proof that entertainment of this nature should not be needlessly dismissed and actually can provide a ton of entertainment to viewers of any age. The film also has put Efron on my radar of actors to keep an eye on in the future. I cannot believe I dismissed this film earlier in the year.

*side note on the connections I draw between Hannah Montana: The Movie and 17 Again: Melora Hardin, who plays the principal here, also plays Lorelai in Hannah Montana: The Movie. Also, I couldn't find a place to insert this screen shot, but I really wanted to, so I'm going to put it down here before my usual ending. It is from one of the film's great confrontation scenes. 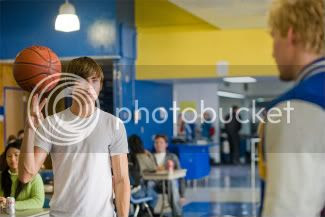 Also I am on the old Twitter thing so I guess you can follow me at twitter.com/FLYmeatwad.
Posted by Rich Thorne at 12:41 PM