Raise The Trumpet, Sound The Drum

The Hurt Locker (Bigelow, 2009)
Apparently the latest film from director Kathryn Bigelow has been called the best Iraq War movie ever made. Considering that it is the only film dealing with the Iraq War that I have watched forces me to be inclined to agree with this statement. However, as an action film and a war film, two other genres that I am none too fond of, the film succeeds as a staple of each genre and is certainly one of the best war films and one of the best action films that I have yet to see in my limited exposure to each genre. The Hurt Locker is a breath of fresh air in what has been, once again, a lackluster summer blockbuster season. Even with good films like Public Enemies, there are glaring flaws that are a detriment to the film. In most cases The Hurt Locker avoids these flaws and makes for a compelling ride from start to finish. Though I appear to be getting ahead of myself, it seems more beneficial to delve a bit deeper into the film before calling it one of the year's must see films.

For all intents and purposes The Hurt Locker is an Iraq War movie, and in many senses it is very topical to the fallout of the conflict in Iraq. Instead of taking place during any battles the film focuses on the final 45 days of a company's tour to apparently keep the peace and maintain liberty, or victory, it's never made very clear. Despite being applicable to the Iraq War, the film is structured in such a manner that the conflict is really an after thought. Sure the title metaphor would not work in other historical contexts, this bomb safety suit and the lengthy use it gets appears to be a more modern occurrence, but the interaction of characters and the focus on inner conflict and other psychological strains are, I imagine, applicable to taking part in any high stress conflict. Amidst all the bomb disarming, detonations, and gun fights, Bigelow attempts to get into the collective military mentality rather than simply present a conflict for conflict's sake. While not every attempt she makes succeeds to its fullest potential, Bigelow's work here can best be likened to the sniper in the desert battle sequence: never very far off of the mark. 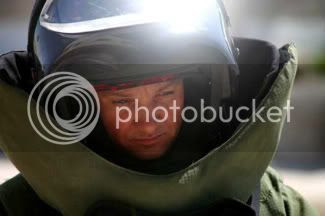 The film has a number of set pieces to build the tension, all of which work spectacularly, I found myself during each suspenseful sequence completely engrossed in what was going on and at times completely wrapped up in the film's world. I do not find myself this engaged at the best of times in most films, so the ability of The Hurt Locker to pull me in as quickly as it did and as often is certainly an aspect worth noting. Of course the majority of this is likely a result of Bigelow's direction and the manner in which she uses the camera. She switches from a standard and very well disciplined hand to a more documentary and free approach on the fly, kicking up and leaving out the grain as each situation demands. However, the visual aspect that stood out most about the film is, without a doubt, the cinematography. I find it with little surprise that Bigelow was, at one point, a painter. Whether it is a man's outline paired against a raging fire, a cat limping through the street, or a bird's eye view of the disarming crew from the top of an Iraqi building, the film mimics a canvas incredibly frequently during the film's over two hour run time.

Speaking of that limping cat, the one problem that I did have with the film was that it seemed to set up all these allusions, we get cigarettes as the focus of two shots and felines as the focus of two more, but none make recurring appearances enough to provide all that much substance. Even the sniping sequence, flies glide around a man, walking over him and into his eyes and mouth, making him no different than any other corpse, is only really used once. Though perhaps the film's decision to not commit to these images is to its strength as The Hurt Locker is such a success because it never takes a side in the Iraq conflict, it just documents. The good is placed along side the bad, fun sequences followed by gruesome ones, and the loyalty of each man to the war is constantly fluctuating instead of remaining constant in generic Hollywood style. There very well may be a political agenda here, but if that agenda exists it is so deeply buried beneath all of the psychology and characters that it might as well not exist at all. In no way do political motivations add or detract from the film though, reinforces the idea that the Iraq setting is not as important to the film as it seems.

I have spent all this time without talking about the acting, all of which is pretty damn top notch. The performance that stands out the most is delivered courtesy of Jeremy Renner in the role of William James. He plays the role with such an intensity and charm that it is hard not to become, at least at points, a supporter of how he handles each situation. However, his brash attitude is also cause for concern and Renner sells this perfectly. It's a really impressive performance and adds a ton to the film. Of course each supporting role is pretty damn impressive as well and the way that humor is handled in the film, always blended in nicely and rarely forced or unbelievable, is particularly impressive. The film is well balanced, action and humor work with psychology and the war perfectly. The film is damn impressive.

The film really grabs hold and does not let go through the entirety of the run. Bigelow has crafted an impressive film that does not only capture the Iraq mentality, but attempts to capture the military mentality. Now I do not have the personal experience to know how well she has succeeded in doing so with the film, but Bigelow certainly provides enough to chew on to provide an idea of this life to the common viewer. Hitting all the ups and downs with a masterful grace, Bigelow brings audiences into the suit, into the Iraq conflict, and captures this intensity magnificently. An unrivaled adrenaline rush, The Hurt Locker is an action film and a war film for the ages.

Also I am on the old Twitter thing so I guess you can follow me at twitter.com/FLYmeatwad.
Posted by Rich Thorne at 10:58 AM