You Can't Even Speak, But All Of Them Speak

In The Loop (Iannucci, 2009)
Every so often television shows get made into films. From what I know most of the adult shows made into films are usually pretty well regarded by fans and usually by critics alike. I do not know why, nor have I seen many of these films, but as talks of the Arrested Development film heat up I find myself caught up in the television to film transition hype and, as luck my have it, my recent viewing of In The Loop, based on the six episode British series The Thick Of It, is an example of a successful transition of a short lived series to the big screen. Now I ought to say that, while I knew a few things about the show, I have never seen an episode of the series nor have I seen any of Armando Iannucci's other work. However, after watching the show the first thing I feel compelled to do is check out the series and Iannucci's older work, so I suppose, at least in that sense, the film is a success.

Of course saying the film's only triumph is its ability to generate interest in the source material, and I suppose its ability to appeal to someone who is not familiar with said material, sells the film incredibly short because the film is one Hell of a ride and a refreshing breath of comedic air amidst a slew of underwhelming and generic comedies. It seems almost fitting that I watched this after Sasha Baron Cohen's latest effort, Bruno, because, with the exception of Adventureland, it really is the only other comedy I have seen this year that has delivered a good deal of substance mixed in with the laughs. Well, let's add In The Loop to that list because, as the posters may imply, the political satire that Iannucci showcases here is incredibly sharp and witty while still remaining mostly hysterical throughout. By blending the UK aspects with the US politics even an ignorant American like myself who is not in tune with any of the minor British references can find some things to grasp on to when things could easily become too culture specific. The film's script is handled with care and Iannucci delivers a beautifully cynical film that is packed to the brim with an engaging narrative.

As for the direction, there are a few shots and sequences that stand out as being visually noticeable, but I do not think that the film ever breaches territory that is beyond very good. Part of this, I assume, is because the pseudo-documentary, fly on the wall, style has been used in numerous sitcoms, most notably both versions of The Office and Arrested Developed, so that seeing it in a feature length film is not all that striking. Still, it's handled really well and it never gets int he way of the narrative at all, so despite not being anything all that new it is also nothing bad. The camera work is solid though and a joy at some times, it is just nothing that I feel needs extended time spent discussing when the film has so many other aspects of the film worth talking about. 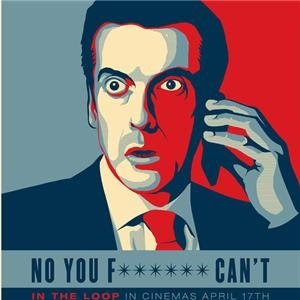 Especially worth discussing is the acting, anchored by a stunningly talented cast who all take full advantage of their time on screen. The minor roles, even the limited time that Steve Coogan gets, are all incredibly funny and usually work in the context of the film and help drive the plot forward and, in the case of Coogan, prove crucial to the film's plot. The two major roles that stood out to me were Tom Hollander in the role of Simon Foster and, without question, Peter Capaldi as the wonderfully hilarious Malcolm Tucker. Hollander brings humor to a role that asks him to be humorously ignorant with flashes of brilliance, a fairly standard role, but when the film really begins making his personal conflict more overt he really starts turning in a really stellar performance. Similarly, Capaldi is given a good amount of time to shine at the end of the film because of the the narrative, but really from the beginning he is a bolt of lightning on screen. His angry comedy combines with his biting wit to make for one of the most memorable and enjoyable characters to appear on screen in a long while. He is absolutely hysterical and enough cannot be said about the man's performance.

In the end, In The Loop takes what could have been a solid comedy and elevates it to one of the year's most enjoyable by bringing together a great script, incredible talent, and very solid direction. I have only watched the film once so far, but from what I was able to gather it should be good for repeat viewings and, given the nature of the humor on display, probably contains many lines that I missed the first time around. Incredibly paced and uproariously funny, In The Loop stands on its own as a comedy and is approachable for those who, like myself, may not have been exposed to the source material. Sure the film is not without its flaws, but the laughs are there in droves and all the extraneous materials blend together to make one Hell of a comedy. I could go on about how great the film is, but I imagine, as tends to be the case with comedy, each personal experience will differ. So, while I do not usually do this, I am urging all readers to take the time and watch this wonderful film.

Also I am on the old Twitter thing so I guess you can follow me at twitter.com/FLYmeatwad.
Posted by Rich Thorne at 12:18 PM