Surrenderin' For What? No Wavin' The Bandanna. Tell The Tool Man How I Handle The Damn Hammer 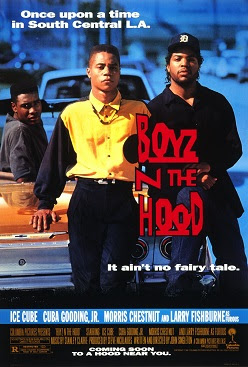 Boyz N the Hood (Singleton, 1991)
I was glancing over my other reviews and I noticed that, with the possible exception of The Adventures of Ichabod and Mr. Toad, I have yet to write a definitively negative review for a film. Going into Boyz N The Hood I was aware that director John Singleton is the only African American to ever be nominated for Best Director and, I learned this later, he is also the youngest nominee for the category. Now add that into the fact that I knew the film had a reputation for being a really great and insightful look at urban violence that neither glorifies or condemns the lifestyle, though that proves to be a misleading notion, while telling a compelling story with believable characters. I usually like films of this nature, the ones that ask questions and expose problems. So mix all of these things together with my fairly high expectations and what result is yielded? My first overtly negative reflection, of course. 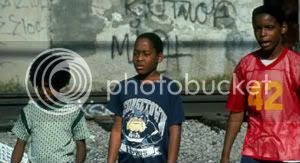 Boyz N the Hood starts off wielding a ten ton hammer that is swung around with more violent rage than any act of brutality in the whole film, all in an attempt to hit the viewer over the head with some simplistic parallel that apparently is designed to be deep or insightful or something like that which hardly works. The scene which I refer to is, of course, the one where the children see that blood is turning yellow and one says "that's because of the plasmids separating," or a similar line. Oh boy, it's like the kids are learning the same thing as everyone except in a different way because of their living circumstances. The streets are just as educational as the classroom. Piss off, John Singleton, you think this is anything but a needlessly overt way to start off a film? Mix that in a few scenes later with Trey's arrival at his father's house depicting, after cleaning, a run down lawn shown alongside the neighbor's beautiful green grass. Lovely, everything is always greener on the other side. Good move. 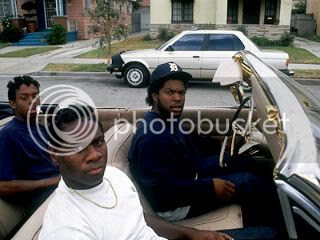 Thankfully, Singleton backs off of these cliched and overly simplistic literary devices when the boys exit childhood and become high school seniors preparing for the end of school. Sadly, what replaces these tired devices proves to be just as detrimental to the film. Singleton essentially trades in his run down Toyota for a tractor with two wheels. The script takes an odd turn to a very cliched Hollywood story telling sense where a love interest is needlessly thrown in, a wife and bastard child are added to set up for more emotional impact later in the film, and the story takes no turn from the first party until the credits. The film just feels like an independent film fighting with a Hollywood film and, much like Doughboy and Ricky earlier, the film just gets dingy and gives up. While there are the occasional sequences that do take a few risks, as a whole the film is so by the numbers that these small probes into meaningful territory are completely undermined.

What seemed so tough whilst watching the film though was not that the film simply kept inserting cliche after cliche, but that it needlessly heightened just about every circumstance and conflict. A scene towards the end where Ricky's SAT scores are revealed proves to be absolutely cringe worthy. Singleton forces stakes into the film and they really stick out as cheap and unnecessary when placed alongside what is supposed to be a tragically brutal and realistic portrayal of impoverished life. On top of that, Singleton's direction, while a few really great shots are used, such as the walk down the rail road tracks, is pretty erratic, ranging from terrible to incredible at any moment in the film. Toss in the score and many times the film started to feel less like an in depth look at urban life and more like an after school special.

Perhaps Singleton's most apparent crime in the film is not inserting needless drama, though that charge is mighty hefty, but rather the most glaring flaw is Singleton's refusal to let the film speak without dialogue. Despite having opportunities, and even using them at times, to imply things instead of directly speaking to the viewer, Singleton feels compelled to give elongated monologues where Larry Fishburne speaks to the audience about his message, and it really comes off as insincere and overly constructed. Then there are parts where someone talks about how things just keep happening "over and over again." It's all pretty painful to listen to and detracts from any impact the film hopes to make on a viewer. The film is not helped by the actors either. Fishburne is decent, but Cuba is pretty bad and Ice Cube is mostly tolerable. 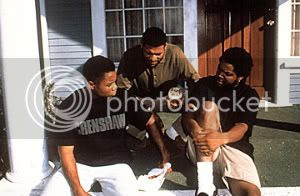 And of course there is the fact that the film is going over territory already explored in much greater depth, in much more detail and with much more sophistication, in other films. The whole concept of being trapped and unable to escape, or the perceived mentality of being contained, is straight out of Charles Burnett's wonderful film Killer of Sheep. Aside from being a much more striking and emotionally engaging film, Killer of Sheep also exists in a much more reserved fashion and does not need to insult the viewer by spoon feeding ideas at each possible opportunity. On top of this, Spike Lee has explored the other territory this film masquerades as exploring in an attempt to appear complex and thought provoking. Despite it not being a tremendous film, Spike Lee's Do The Right Thing provides a more engaging and insightful look at urban life and the injustices of American society without resorting to the theatrics on display in Singleton's film, allowing for a more naturalistic film that enhances the message instead of detracts.

Much like Do The Right Thing, Boys N the Hood becomes incredibly overt at the end. Yet while Spike continues to call on reality, Boyz N the Hood continues to rely on its cheap theatrics to attempt and force a greater emotional impact on the viewer before proving to be an ultimately hollow experience. The follow up 'here's what these characters are doing now' lines that fade in and out, aside from reinforcing the After School Special feeling, continue to draw attention to the fact that everything on screen is artificially heightened and constructed; thus, any attempt to draw parallels between these characters and the reality is, for the umpteenth time, ground into a dust and blown away in the wind.

Ultimately, Boyz N the Hood is nothing more than a jumbled mishmash of ideas that are far too willing to conform to Hollywood convention to discover the sort of effective statement that the film so desperately attempts to find. Even without considering the fact that other films, and older films, have done what Singleton attempts, Boyz N the Hood still proves to be a joke of a film that struggles to ever find ground solid enough to stand on either as a high profile Hollywood film or as a thought provoking call to social action. I honestly would like to know if anyone, after seeing the Burnett film and the Lee film, can still make a case for Boyz N the Hood being worth much at all. Hell, I'd be interested in hearing this case made even from someone who has not seen either the Lee or Burnett films because it baffles me that this film can be considered anything except for glorified garbage. I imagine there is more entertainment and more insight to be gained from watching Don't Be a Menace to South Central While Drinkin' Your Juice in the Hood.

Also I am on the old Twitter thing so I guess you can follow me at twitter.com/FLYmeatwad.
Posted by Rich Thorne at 10:55 AM