Before Sunrise (Linklater, 1995)
Upon the start of Richard Linklater's film Before Sunrise I was aware of two things: it is followed up by a film called Before Sunset that I also had not watched and this was the guy who directed Dazed and Confused. It was not until I began writing this review that I learned that Mr. Linklater brings disgrace to all associated with his first name by also being the director of the dreadful School of Rock starring the waste of space known as Jack Black. Regardless, the point is that none of these things stood out as very impressive. Perhaps because of my ignorance I was able to take such joy in what I was to encounter in Before Sunrise. To put the film simply, it chronicles two people who meet on a train and spend an evening in Paris. However, the film takes a basic premise and elevates it to mighty impressive levels, putting an interesting spin on the common romance tale that has been told time and time again. 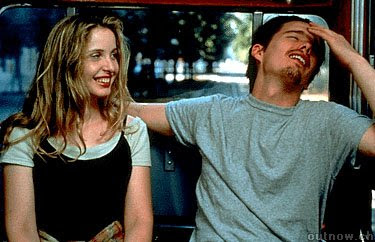 Part of the reason the film is so engaging is because it is anchored by two leads who each give performances for the ages. Ethan Hawke and Julie Delpy are near flawless as the two lovers, both bringing so much joy and humanity to the characters that it is near impossible for the viewer to not be wrapped up in the conversations that take place. And boy do conversations take place. Practically the entire film is spent alongside dialogue. Hawke starts and then Delpy picks up, Delpy starts and then Hawke picks up. They overlap each other, they ping pong off each other, they do it all and they keep the conversations going. Sure it's all off a script, but the chemistry here is truly amazing and it really sells the romance aspect the film presents. There is no questioning that these two people work together and that the stars have simply aligned perfectly for this evening.

Of course the film is not without its flaws, the film gets a little talky, of course nothing all that surprising considering the amount of dialogue, but since just about all the conversations are either entertaining, intellectually stimulating, or a combination of both, the one or two slower sequences are not all that detrimental to the film as a whole. The ambiguous note that the film ends on is absolutely perfect too and the fact that everything all takes place over the course of one night is pretty damn impressive. The film is as entertaining as it is beautiful and, much like Jesse and Celine's night before the sunrise, the film goes by in what seems like a flash.

Before Sunset (Linklater, 2004)
Of course all this beautiful ambiguity, perfect portrayal of passion, and poetic waxing on romance can all quickly be ruined by returning to the same area about nine years later, both in time between films and time in the films, and trying to recapture the simple magic that made the first film such a joy. Thankfully, Before Sunset does not fall into this trap and surpasses Before Sunrise in just about every regard. Hawke and Delpy pick up right where things left off, falling back into the roles with masterful grace and selling the relationship almost instantaneously. All the charm is not only recaptured in the film, but delivered completely differently as time also breeds experience and knowledge, two traits that both of the performers portray beautifully. All of the magic is here. All the lengthy conversations about love, about life, and even an incredibly blow up delivered by Delpy, who is also stunningly beautiful in the film. Perhaps the most impressive choice is to not fill in the gaps and just let the film exist, as the first one does, in a short amount of time: Jesse's countdown to his flight before one Parisian sunset. The audience learns just as much as they need and the beautiful ambiguity is never sacrificed.

But going on about all of these great elements does a disservice to the greatest stride that this film makes in the ten year span since the release of Sunrise, and that would be the direction. Linklater's camera work here is incredibly impressive and each shot feels so carefully constructed. Actually, the majority of the film stands out to me, at least visually, as similar to moving photographs. I am unable to really pick out a single shot that captures the Parisian beauty because the film is really packed full of them. The scenes in the cafe, the boarding of the boat, the walk to Celine's apartment, even the beginning sequence at the book store just bleed masterful craft. The film is a visual powerhouse.

Particularly interesting is comparing how the more 'free' camera in the first film mirrors the relationship between Jesse and Celine as they met the first time and how the more focused and developed camera work now mirrors the more mature people as they have grown older and are reunited. Was this done intentionally? Going by what I saw in Dazed and Confused and School of Rock I'd say probably not, but seeing how Linklater has grown as a filmmaker just as Jesse and Celine have grown as people is, forgive me for dropping the formalities, pretty damn cool. 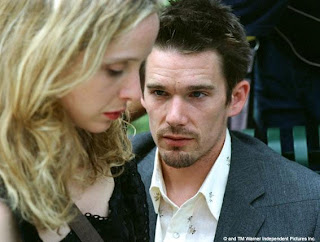 Before Sunset flies by just as quickly as Before Sunrise, but everything in the film is just so much more heightened and developed that it is not only the superior film, but an incredible film on its own merit. Linklater forsakes all the flash of the standard romance film, he strips away everything except the most basic of elements, and he lets things play out as two people reconnect. Linklater takes three basic elements (woman, man, and love) and weaves a compelling narrative with all the primal power of the greatest story tellers. It suffers a few of the same downfalls that I had with Sunrise, except toned down a bit, but once again the problems are not as noticeable in such a great film. And then there's always that beautiful ambiguity. 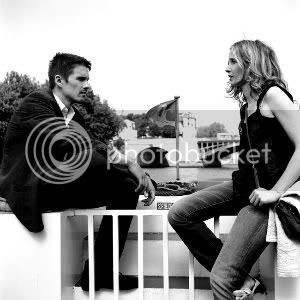 So I was going to write a bit more about how the two films connect, but I think I have compared, and used the word beautiful, more than enough for one blog post. The one thing I do want to say is that as individual films I am not sure that either is a masterpiece, but when taken together the whole experience is elevated. As a combination there are very few film experiences that I have had with the raw power and enjoyment from the Before Sunrise/Sunset series. Together they are a masterpiece and, I'll say it one last time, a true work of beauty.

Also I am on the old Twitter thing so I guess you can follow me at twitter.com/FLYmeatwad.
Posted by Rich Thorne at 6:34 PM