Two Eyes Took The Aim Behind A Man's Brain, But He Can't Be Blamed

Brüno (Charles, 2009)
Just three years after the release of Sasha Baron Cohen's near legendary film Borat was released to American audiences amidst high critical praise, Cohen is back with a film very similar in nature, Brüno. Given the man's reputation, and even the slew of cameo appearances that Cohen has made in various films since Borat's release, the fact that expectations for the follow up film were sky high was pretty hard to overlook. Perhaps Borat was too big, surely the crew would not be able to find unsuspecting interviewees, let alone ones who are icons in the media, just a slim three years since the release of Borat. Well, these doubts were not without concern, but thankfully Cohen was able to find just enough to make a mostly engaging follow up without going too overboard. Mixed with Cohen's comedic genius, the film proves to be a solid comedy and, as expected, exposes some more of the American mentality and all that comes with such a mind frame.

While I would love to say that there is a ton of substance to Brüno, that is simply not the case. The constructed story is fairly basic and mostly follows the exact same formula that Borat did, except that this film has much more actual story instead of interviews and things of that nature, likely because it was a bit more difficult to find people who did not know that Cohen was once again on the prowl. As a result, Cohen deviates from what was Borat's, and also what is Brüno's, greatest strength: pressing people to expose prevalent attitudes that are usually well concealed. Cohen's ability to see below the surface is truly astounding though and when he is given the chance to sit down and talk the film really shines in a way that mimics some of the greatest documentaries. 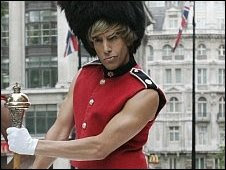 Sadly, these sequences come at a price. Cohen uses various sequences that do not drive at any particular point at all and seem to conform to the notion that these films are designed to shock simply to shock instead of challenging this notion by providing more direct satire. One of the film's lowest points comes in the form of a talk show session when Cohen parades around an adopted child. While even this scene has a few moments of brilliant, the reveal of being a homosexual and seeing how the crowd turns on him is brilliant, the scene is followed up with needless shock and needless theatrics that add little to the film overall. Of course the few scenes like this only make the scenes like the 'gay converters' in Alabama even more rewarding and, with the exception of the song at the end of the peace talks skit, a part that is humorous but does not really bring all that much substance, the humus conversation is genius, plain and simple. 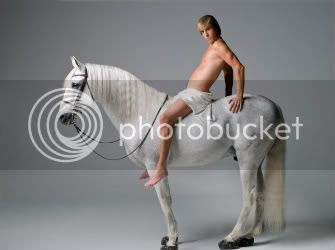 The problem that Brüno could have easily fallen into is that, unlike Borat, focusing on the fashion world as a means of satire is a bit more difficult than the broad brush of politics and America that Borat painted with, but even the scenes that focus on the fashion industry and the entertainment industry, specifically the part with the parents practically willing to whore out their children for the promise of fame, are so sharp and hit so frequently that the film can hardly be faulted for the occasional lulls found in the lesser skits or the underdeveloped plot. Even a seemingly weak skit, the one involving the incredibly intelligent Dr. Ron Paul, that forces so much needless shock for 'plot purposes,' the pay off is a well timed Ru Paul joke, is bearable because of the way Paul seems to be completely willing to spread his message until Baron Cohen pushes too hard. 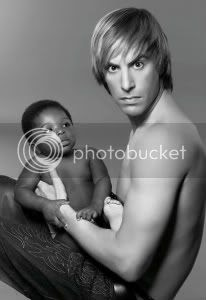 Honestly, I did not think that I responded this positively to the film, but the more I think back the less I remember the bad things and the more the good parts actually stand out. I mean the Paula Abdul scene where she talks about her compassion for her fellow man as she sits on a 'chair' made of a Mexican laborer, it's not only funny at the visual level, but the idea behind the whole situation is pretty stunning. The film is far from flawless, even at a technical level, but Cohen really gets a lot correct here, like the scene at the Alabama National Guard. Factor in the use of traditional comedy, and the song at the end that likely has Baron Cohen, as well as myself, pissed that the Best Song category at the Oscars is apparently getting the shaft because it really seems like it can be up for consideration.

Perhaps the greatest testament to Cohen's success is found in each individual theatre. Like Borat, Brüno is a film that demands to be seen with a group in a theatre because the comedy on screen is not the only part of interest, how everyone responds to the situations on screen can be just as telling of what Cohen seems to probe with the film. We are all participants in his experiment, just like what Spike Lee does with a film like Bamboozled. The man does not ask us to laugh, he asks us to ask why we laugh. Sasha Baron Cohen cements his genius with the film and solidifies his role as a great social experimenter of modern times. Stanford gave us the Prison Experiment, Milgram challenged the notion of blind obedience, and Cohen as given America both Borat and Brüno. Are either films the most flawless of films? Certainly not, but I believe there is little denying each film's importance.

Also I am on the old Twitter thing so I guess you can follow me at twitter.com/FLYmeatwad.
Posted by Rich Thorne at 10:34 AM