Meet The New Boss, Same As The Old Boss

Ikiru (To Live) (Kurosawa, 1952)
The Kurosawa marathon continues with the 1952 film Ikiru (To Live). Now because I know little about Kurosawa outside of what I saw in Rashomon I have to wonder if this film is any indication of what types of films are to come in the future from the acclaimed director. Sure Rashomon started getting all philosophical at the end, but Ikiru starts things off with a metaphoric bang as we quickly learn the circumstances and are introduced to our protagonist. Given the film's description on the Netflix packet I had little idea of what the film would consist of aside from a man trying to build a park, but little did I know just how deceptive such a description is in the film's larger context.

Speaking of larger context let's start pretty broad and begin narrowing things down from there. Kurosawa turns in another fantastic effort behind the camera and, in some ways even more than Rashomon, makes for a visually compelling film. Seeing how differently he handles shots in a larger and congested city as opposed to the tangled forests was interesting and really gave the film its own stylistic feel while keeping with elements that are quickly becoming Kurosawa trademarks. Once again seeing the influence that the man has had on future films is near unmistakable when watching Ikiru, but in some ways I almost felt that, as far as direction is concerned, Rashomon is just slightly stronger. However, every time I thought this we would get sequences like the playground one or the one in the bar early on. In other words, the film looks pretty damn beautiful.

So now we'll get a little more concise and focus on the acting. While the film is littered with a ton of really good performances throughout, the anchor, as the script demands, must be Watanabe. Thankfully, Takashi Shimura turns in a top notch performance that hits all of the right notes. Even if the script was horrible, the direction terrible, and the other actors particularly dreadful, I am completely confident that Shimura's performance alone would make for compelling cinema. Obviously none of that is the case though and all the surrounding elements only help to enhance his job on screen. He captures the mentality of man perfectly and seeing him develop in the face of certain death and a crumbling family life is handled masterfully, both by Shimura and Kurosawa. The performance is truly incredible and certainly had me impressed throughout the hefty two and a half hour run time. 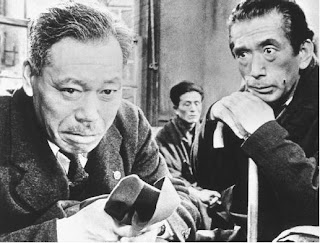 Now the run time could have easily been a flaw, and there were one or two scenes where things slowed down a noticeable bit, but for the most part the film was paced excellently. It clearly followed a very direct Three Act structure, but age old tales have always been told about how life is, at its core, three different parts all making up a whole. I do not think it is by coincidence that Kurosawa structured the film in such a manner, and taken in context it's a truly remarkable technique. Actually, most of the artistic value of the film is handled wonderfully and just about all of the philosophical stuff is given ample attention.

The one problem I had with the film was in the bureaucratic commentary. The film starts off with a whole round about sequence of going from department to department that is used incredibly, and most of the stuff in the third act, especially the final returning to work portion, is flawlessly executed, but the theme feels a bit underdeveloped during the middle portion. Now I know this theme was not supposed to act as the backbone of this portion, but having a little more there could have really pushed the film over the top for me. When the number of successes in a film are so plentiful, as is the case with Ikiru, the one flaw tends to stand out, but as I evaluate it I am able to realize that it does not hurt the film all that much. The only other potential problem I can think of, as was the case with Rashomon, is how direct the ending is, though thankfully nothing feels rushed or forced here, so the problem here is more personal and less technical, so my supporting evidence is limited. 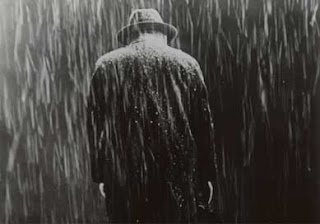 Ultimately, my second experience with Akira Kurosawa was similar to my first. Things start off fairly simple, but as the film builds it picks up momentum at an astounding rate and makes for an incredibly compelling film. I think the sheer amount of material here, extraneous ideas given to each individual viewer I mean, is so numerous that I need at least one more viewing to process everything, but I can say without a doubt that Ikiru demonstrates Kurosawa's versatility as a storyteller and as a director while still existing wonderfully as a narrative. Ikiru hits every note pitch perfect and has me, once again, excited to see more Kurosawa.

Also I am on the old Twitter thing so I guess you can follow me at twitter.com/FLYmeatwad.
Posted by Rich Thorne at 12:16 PM