Let Me Hear You Say, "Fight the Power!"

Welcome to Processed Grass, my blog for film, music, television, novels, and any other forms of culture that are not directly video game related, as those cultural venues are covered over at Multiplatform. I will give a proper first post later, but for now let's kick things off with a reflection on a brand new film! 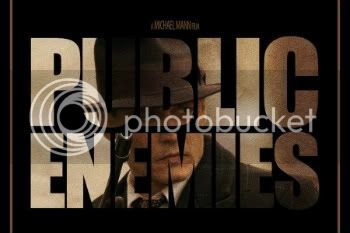 Public Enemies (Mann, 2009)
My first experience with Michael Mann comes in the form of Public Enemies, the period piece dealing with John Dillinger, events that I have minimal knowledge about and mostly only know that Nick Twisp would like to adopt the surname in the Youth in Revolt series. Still, it bills Depp and Bale as the lead actors and the 'lesser' roles are really nothing to sneeze at either, so regardless of my knowledge of the events I should at least be able to fall back on a well known director and a good number of big name actors in what I assume, judging by the release date, is so big budget summer popcorn film that is going to follow up Transformers. I mean all the pieces are in place for a smash hit thrill ride that follows the gangster formula and plays to a market that really hasn't seen a similar film released since The Departed, correct? 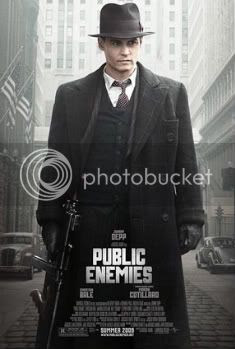 Well, partially I suppose. Mann's direction ranges from brilliant to irritating, though he handles all of the action sequences spectacularly, unlike two other films featuring Bale released recently, and really the whole film is visually stunning. The costumes are great, the scenes are beautiful, and there are a number of shots that are simply top notch. All in all I'm pretty pleased with what Mann put together. Similarly, the acting is pretty damn great as well, though I don't really understand why Bale is billed as a lead. Sure he plays an important role in the plot, but he is not in the film an incredible amount of time and there are points where it is easy to forget that he is even around. When he is on screen though he's really good, playing his character believably and drifting in and out of accents that seem straight out of his 3:10 to Yuma character and the Jack Rollins character from I'm Not There. The real star though, as expected, is Depp. His performance is perfect, he brings so much to the Dillinger character that each moment he is on screen the audience is left guessing what he will do and how he will react to the situations around him. Depp plays things cool and collected when needed but he also captures the force of a truly dangerous man, it's damn impressive.
Aside from the leads though, all of the supporters do an excellent job whether their roles be small or large. Obviously the next biggest role is the love interest, played by Marion Cotillard, and she does make the most out of her screen time. I haven't seen her in anything else so I really do not have anything else to compare her performance to, but she does a really nice job here and there are a few scenes, one particular one later on, where she is pretty fantastic. Sometimes great actors and actresses come together, and I'm not saying that Bale is a great actor, and things do not always work as well as they should, but in this film all of the actors did a bang up job that became really refreshing in the midst of a lackluster summer movie season.

Actually, the entire film is a nice break from the summer blockbuster season and from the typical summer popcorn film. What could have easily been a generic over the top gangster film takes on quite a few layers by not cramming itself full of overblown gun fights or bank robberies, actually the number of each are kept surprisingly minimal, and really remaining focused on watching the characters exist in this brilliantly established world and documenting what was happening. I'd actually be really surprised if this film makes a ton of money or if it becomes associated with the stereotypical summer blockbuster because the film seems to go above and beyond that label by ignoring most conventions found in other releases this year like Star Trek or Transformers 2.

To be honest the most notable difference between those films, and I suppose a similarity as well, is how plot is handled during the film. Dillinger speaks about not living in the past or being overly concerned about the future, it's all about "where you're going," and the film seems to follow this idea in the way the film is set up. 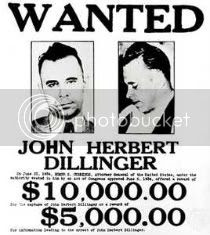 Minimal back story or motivation is given, perhaps because it's a 'true' story or perhaps not, and the film never clearly establishes a definitive goal that should be reached by the end; very little overarching plot exists in the film. Still, the film is incredibly captivating. This structure is mighty interesting and should make for a dull film that does not demand engagement, but Mann establishes the world so perfectly that it is simple to be swept away and simply go along as an observer in a manner that combines all the entertainment of a film with the interesting aspects of a History Channel special. It's pretty damn impressive and it is nice to see Mann not overly cram the film with cliche and convention in favor of entertainment and an easy to swallow film. He simply lets the film exist, adding to the 'real world' quality and enhancing the world that is presented, all blending together spectacularly.
So do I know if all the facts line up? Probably not. Is it the best film of the year or a transcendental experience? Nope. Hell, do I even think that it is one of the best gangster films ever made? Certainly not. But Mann provides an entertaining, interesting, and exciting film that is a breath of fresh air in an over crowded, explosion filled summer, and for that I can be pleased.

Also I am on the old Twitter thing so I guess you can follow me at twitter.com/FLYmeatwad.

Photos from cinematical.com, scribeculture.com, and joblo.com in order of appearance
Posted by Rich Thorne at 3:14 PM