Hear the Rhythm and Rhyme? It's Melody Time!

Melody Time (Disney, 1948)
Plowing through the marathon we come across what I assume to be the last of the package films from Walt Disney, Melody Time and The Adventures of Ichabod and Mr. Toad. I have yet to watch the latter, though I watched the Sleepy Hollow short many times as a child and am mostly confident in saying that Melody Time is the final of the psuedo-Fantasia films for quite a while. Now I also do not usually have a mind to give things away before writing up my reviews, but my feelings about the atrocity that is Fantasia are well noted so I think that it should come as no surprise when I say that Melody Time, a film consisting of six short films all paired with songs ala Make Mine Music, is worlds above that instrumental insult of a film.

However, what came as a surprise to me was the fact that Melody Time is not only worlds above Fantasia, but it is considerably better than any of the package films of the same type to precede it, excluding Song of the South obvious, even the incredibly surprising Make Mine Music. The common complaint against Make Mine Music was the presence of at least three subpar sketches as well as animation that simply was left over from Fantasia. Now I have contested that in my marathon post about that film, but what I found incredibly striking about Melody Time is that is seems to be a direct response to both Fantasia and Make Mine Music. None of the segments here are anything worse than pretty good, the animation, especially of water, is incredible, and it even has segments succeed that lean more toward the instrumental side of things. My praise of Make Mine Music as being everything that Fantasia should be may have been a bit hasty as I am now fully able to proclaim Melody Time as the best representative of what Walt Disney was attempting to capture during this time in his career. Sure it sacrifices a majority of what made Make Mine Music so diabolical, but who gives a damn? It succeeds at just about everything and makes for a compelling and fun watch.

Now let's break down segments. Things kick off rather quietly with the "Once Upon a Winter Time" short that features a couple ice skating while two rabbits imitate them. Kind of cutesy and lovely and stuff like that all paired with a nice song about how great December is courtesy of Frances Langford. Then shit starts to get real! Lyrics are abandoned as the instruments pick up and make for a thrilling action piece that never overstays its welcome and always is progressing. It all wraps up nicely and really serves as an excellent starting point because it shows the film's ability to blend both the lyrical with the musical. Now it is followed up with a full on instrumental nightmare entitled "Bumble Boogie," but the segment actually works because the instrumental is so powerful and fast paced while the segment is rather short. It's a pretty nice trip too that rivals "Elephants on Parade" from Dumbo as one of the best uses of imagination thus far.

Yet the film does not settle for instrumentals and changes paces rather nicely to the lyrically driven "Johnny Appleseed" segment which, just a side note here, features a word that I will be integrating into my daily vocabulary, "applesass." The overt Christian references in this one would probably make even the most radical televangelist blush, but they are not a huge problem and add to the whole blind devotion thing that the tall tale relies on to explain part of Johnny's reasoning. It's pretty quickly paced and mighty pretty to look at, but the stand out comes at the end and how the film handles Johnny's passing. The final few scenes are beautifully handled and simply engaging cinema. You think Up handles death nicely? Well does that film ever tell an old man with the mind of a child that his corpse is a husk? I thought not! Diabolical Rating: SATANTENSE! 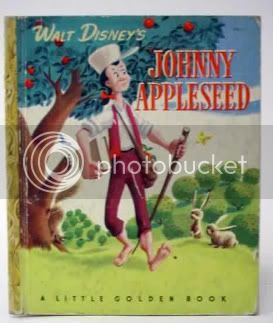 Things get toned down a bit from there, only slightly though, when the "Little Toot" segment begins taking over. It starts off feeling slightly like an aquatic version of the plane part from Saludos Amigos, but the song is actually really charming and the devilish antics of Little Toot are pretty much established from the beginning. His story is pretty predictable, but it's still a joy to watch play out and the animation here is probably the second best of the entire film. The waves during the rescue scene are simply stunning and it is really hard not to get caught up in the adventures of the tiny tug boat. You really are a Big Toot now Little Toot! Probably the most 'cartoony' of all the segments, but still a joy to watch.

Next the film starts to speak to the poet inside of me, in fact it sings to the poet inside me. "Trees," sadly not "The Trees" by Rush, is sang along to some orchestra playing along as we watch trees change through the seasons. Is this where Malick gets his nature fetish? Probably not, but the animation of the title figures are pretty fucking marvelous and, paired with the poem, make for one of the most beautiful and powerful segments in the entire piece. I may even go as far as to call this my favorite segment. The images used are fantastic and the various types of animation are superbly handled, clearly a ton of time and love went into the crafting of this segment. It's truly an artistic accomplishment on par with Bambi as far as Disney animation in the marathon so far is concerned.

The last two segments I imagine people will have trouble with if they are cynical and pessimistic bastards because one is probably a scrapped segment from The Three Caballeros and the other has a lot of live action at the beginning, but I think both are pretty great. The first segment, "Blame It On The Samba," is once again pretty visually stunning and mighty fun. The way the lady swirls in alcohol is cool as well, I liked that a ton because it's like the film is saying drink, dance, and find pretty girls. It's a fun segment with a fun song. I was also a pretty big fan of the closing "Pecos Bill" segment because, aside from the really entertaining live action, the tall tale is interesting and the animation is fun, plus it tells a full story, which is refreshing in a segmented film. The idea of American mythology is really interesting to me as well, reminds me of Greek myths except they are representing the USA, so that kicks ass. USA! USA! USA! It's a great way to close out the film.

Melody Time truly is the culmination of the package films to come before it and it does just about everything spectacularly. Not only is the film leaps and bounds ahead of Fantasia, but it's really so far ahead of the best of these films that I cannot help but be impressed. While there may be questions of the validity of these films in the Disney marathon or if what Walt tried to do was worth all the effort and the years of 'sub par' films, I think that Melody Time truly shows that he was on to something and that the experimentation, both the successes and failures during this time, were incredibly worth while. One of the most entertaining and enjoyable films in the marathon thus far and a perfect way to close out the musical package films.

Melody Time achieves a 10.5 out of 17, with 0 being Fantasia, 8 being my recollection of another specific film in this marathon that will be revealed when it has been watched, and 17 representing how great Hercules is based on my most recent watching, which was likely over the summer, or winter break.

Also I am on the old Twitter thing so I guess you can follow me at twitter.com/FLYmeatwad.
Posted by Rich Thorne at 4:51 PM