What I Read Between The Lines: Your Lies

Rashomon (Kurosawa, 1950)
It has taken me needlessly long to get started with Akria Kurosawa's films. Finally, the Filmspotting marathon that Adam and Matty are doing on the podcast has allowed me the chance to really start watching films from a man who is considered to be a master filmmaker. I'm going to skip all of the historical background and things of that nature, not that I would likely be able to offer much insight in the way of correctly placing him in his time period or alongside his contemporaries anyhow, in order to focus on my reaction to my first venture into Kurosawa's robust library of films.

Rashomon has a pretty interesting structure, following a recurring narrative that offers four different occurrences of the same event as a man is put on trial. However, these narrations are narrated by two men at a temple, so really we are hearing a story of a story, and if you take into account the fact that the film is apparently based on another story it adds another fun little layer into the mix. As for the style, it is used much to the film's benefit. Paired with meandering shots through a dreamlike, or perhaps nightmare would be more fitting, forest, the viewer is made to be swept away with each narrative as the idea of fact versus fallacy is constantly in one's mind, but hardly ever able to be discerned in any tangible fashion. Really all we know is what is shown at the Rashomon temple and that the one man is dead, everything else is open to interpretation. 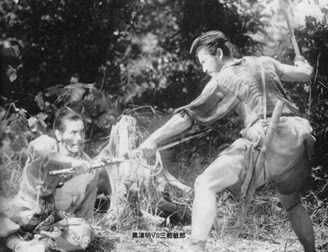 Of course even the way the audience is asked to be engaged and how any individual viewer should interpret the scenario is enhanced by having a faceless inquisitor prod each of the characters to make direct appeals to the camera. The technique is really brilliant and is sure to never give away any details that may place more fact in the hands of a viewer. In a sense, the character that is being told the story by the axeman and the priest is placed in the same situation as a viewer and, towards the end, begins piecing things together on his own as any viewer of the film likely would as well. The film's construction is pretty damn masterful and thought provoking all the way up to a mostly beautiful finale.

Now I have talked all about the construction and have yet to mention the direction and the cinematography. Both are beautifully in the purest sense of the word, Kurosawa's control of the camera paired with Miyagawa's beautifully constructed scenes makes for an experience that is phenomenally striking purely from a visual level, but also one that allows the film to exist almost silently. The dialogue at points is minimal, but none of the tension is ever lost nor does the narrative ever slow down. Dialogue becomes an equal with the images, breaking the barrier between story and painting and doing it wonderfully.

Of course the film's ability to work even in elongated silent sequences, especially when most of the film is so concerned with narrating stories, is also largely thanks to the actors involved. All of the actors give spectacular performances and nothing less than a solid performance can be found. However, mixed in with a slew of really good performances, two particular ones stand out as incredibly impressive. Toshiro Mifune turns in a wonderfully maniacal effort as the bandit Tajomaru, categorized by a signature cackle that embodies the best and the worst of the human experience, while Machiko Kyo is phenomenal as Masako Kanazawa, the wife of the murdered man. Both show an impressive range and turn in riveting performances in their respective roles, but the one scene that really sold it for me is how both act in the axe man's tale. Both interact with each other wonderfully without Mifune or Kyo losing anything to the other.

I have very few gripes with the film. The picture is perfectly paced and sustains its running time nicely, clocking in around 88 minutes. The one part that struck me as odd, though not really a flaw in the film I would say, was the conclusion. I did question the priest's reaction at a pivotal point, and his change actions seemed a little forced, though they worked nicely with what Kurosawa was trying to do, which is the trade off when using characters as representations, as the case appears in the final scene. I am also still wrestling with the film's concluding message, I believe it is rather obvious and if that is true then I suppose I have a bit of a personal problem with what the film is saying rather than a technical problem. To have things end how they do after a wonderfully human and pretty nihilistic speech is delivered seems to undercut what just occurred rather than provide a juxtaposition. Still, I am aware that this problem is purely personal and not a flaw of the film.

Ultimately, I found my first experience with Kurosawa particularly impressive and I cannot wait to delve deeper into the man's body of work. Rashomon takes a seemingly simple tale, shoots it beautifully, tells a story, and then unloads a shotgun shell's worth of philosophy upon the viewer towards the end. The results are hardly painful though, the experience proves mentally stimulating and utterly flooring, capturing the mentality of a lone bowling pin in the ninth frame. I look forward to hearing Adam and Matty discuss the film on the podcast this week and am positive that this marathon is going to be spectacular.

Also I am on the old Twitter thing so I guess you can follow me at twitter.com/FLYmeatwad.
Posted by Rich Thorne at 8:08 AM